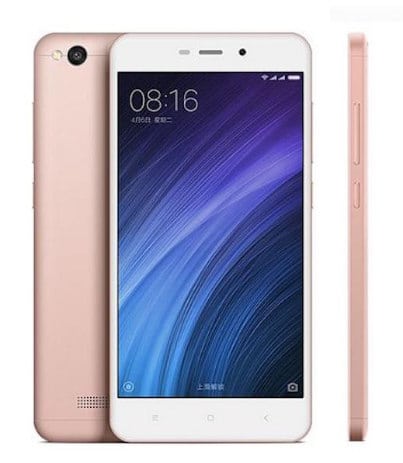 Share
Facebook
Twitter
Google+
Pinterest
WhatsApp
Good news for Xiaomi fans and those looking forward to buying the latest budget 4G mobile phone in India. Xiaomi has come up with three new Redmi series handsets, the Redmi 4A, 4, and 4 Prime.

The 1st device we’ve mentioned carries a price tag of 499 Chinese Yuan. Xiaomi Redmi 4A features the latest processor for budget phones and it packs 4G-LTE, VoLTE functionality, and 2GB RAM. It will go on sale from 11th November 2016 onwards in China.

People following Xiaomi news closely may know that Xiaomi had launched the bezel-less mobile, the Mi Mix in China. The Chinese firm announced that it has no plans to sell the Mi Mix in India. The news came as a shocker to people because consumers ready to spend over 20000 Rs in mobile devices don’t hesitate in buying Xiaomi devices

Instead of high-end mobiles, Xiaomi has always launched phones that Indian people can afford. Hence, it is very likely that the Redmi 4A, 4 Prime and 4 may hit Indian markets soon.

Xiaomi may launch the mobile in India for Rs 7000 price tag. If this happens, the firm may sell more units of Redmi 4A as compared to Redmi 1s, 2, and 3 phones considering the huge demand for cheap 2GB RAM 4G mobiles.

The latest Xiaomi Redmi 4A handset offers mind-blowing features for Rs 5000. Like many budget Redmi line of mobiles, the Chinese Corporation has used SD 400 series processor in its device.

The latest phone features a 720 pixels 5 inches screen. It includes Hybrid SIM card reader. Hence, you can use two SIMs or a SIM and MicroSD card at the same time.

Apart from robust computing hardware, the new handset carries a good pair of cameras. Xiaomi Redmi 4A offers full HD back 13 MP and an HD video-calling and selfie 5 megapixels camera. It has flash storage 16 GB memory.

Xiaomi has unveiled 2 versions of Redmi 4 i.e. 4 Pro and 4. The variants include the same pair of cameras and have a display of the same size. Below table explains that differences and similarities between the Xiaomi mobiles.


The three latest Xiaomi mobiles have a weight below 149 grams and have a thickness of below 9 millimeters. The 5000 Rs range handset i.e. Redmi 4A doesn’t provide a fingerprint sensor, but its other two siblings i.e. 4 prime and 4 Standard include it.

iPhone 7 best price and offers in India for 2018