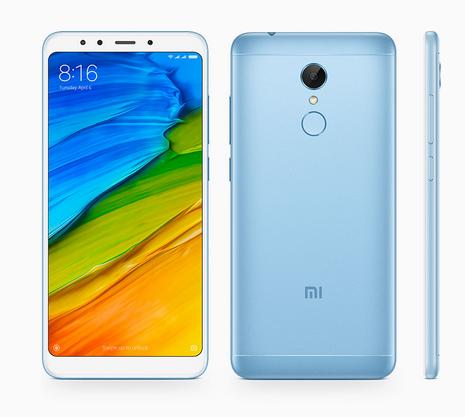 Xiaomi has been ruling the Indian smartphone markets for a long time. It has killed the dominance of Micromax and Samsung. The reason for the massive success of Xiaomi is that the company has been launching high-quality low budget smartphones on a regular basis.

Unlike the Xiaomi smartphones launched in 2007 and earlier this year, Redmi 5 features a metal body. It is also 7.7mm thin. Redmi 5 might be the thinnest phone in the 5000 to 10000 Rs range.

The Redmi 5 handset has an 18:9 aspect ratio based 5.7-inch 2.5D display. It is powered by a 14NM technology based octa-core Qualcomm processor (Snapdragon 450). It provides Adreno 506 graphics processor.

The Xiaomi handset packs five sensors and it carries a fingerprint sensor. The fingerprint reader in Redmi 5 is located on the backside.

The mobile has an infrared sensor. Hence, you can use it to control set-top boxes, speakers, etc. Redmi 5 has two microphones, a headphone jack, and a speaker. Redmi 5 offers Bluetooth 4.2 chip and WiFi. It supports nano-SIM cards. Users can enjoy VoLTE and 4G-LTE technology on this device.

The Redmi 5 handset offers reading mode which makes the screen eye friendly during the night. It also allows users to manually adjust the screen color temperature.

As there’s a huge demand for the latest Xiaomi phones, Redmi 5 will be sold through flash sales. The 1st flash sale will take place on 20th January on Mi.com and Amazon India website. The mobile will be also available for purchase in offline Mi stores across India in 5 color options and two configurations i.e. 2GB RAM and 16GB storage memory, 3GB RAM and 32GB ROM.