Honor 7C and 7A are the latest handsets of the world’s second-largest phone manufacturer i.e. Huawei. Huawei has listed the two devices on popular eCommerce portals/online Huawei stores in South Africa, UAE, Egypt, India, Vietnam, Thailand, and Saudi Arabia. 7a and 7C cost $125 and $132 respectively.

Although the two new smartphones are priced within 8000 to 10000 INR, they are different from each other.

7C and 7A run on EMUI 8.1 ROM (Android Oreo OS). The ROM provides an iAware function that improves user experience by keeping an eye on system resources and optimizing them when required.

The Huawei smartphones can connect to two Bluetooth devices at the same time. They offer two SIM slots and a dedicated MicroSD card slot.

The phones include SMART PA amplifier which provides Surround sound experience and helps the phone’s speaker to deliver up to 88 Db sound output. The Honor 7A and 7C ships phones are powered by Huawei’s energy saving technology and a 3000 mAh battery, which lasts for 1000+ minutes on a single full battery charge.

Display: 7C ships with a 5.99-inch screen. Its sibling carries a 5.7-inch display. The display of the two handsets support full view technology and have HD+ resolution (720 x 1440 pixel).

Design: 7C offers a metal body. 7A possesses a plastic body. This is one of the major points of difference between 7C and 7A. Both phones are 7.8 millimeters thin.

Camera: 7C flaunts 2 rear cameras with 2MP and 13 MP sensor. 7A features a single back 13 megapixels camera. Both Huawei devices boast an 8-megapixel camera with a F/2.0 Aperture lens.

Processor: 7C and 7A ship with an entry-level Qualcomm Snapdragon series octa-core processor. 7C packs an SD 450 processor 7A, on the other hand, includes an SD 430 processor.

7A, 7C vs competition

Frankly speaking, 7A isn’t a great phone. In India, you can buy phones with a fingerprint sensor, 2GB RAM, and a 13MP camera for below 7000 INR. 7C seems to be a good alternative to Oppo RealMe 1, Zenfone M1 Pro, and Redmi 5. 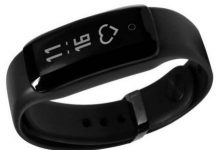 ONAGOfly is a nano drone with camera, IR and smart features