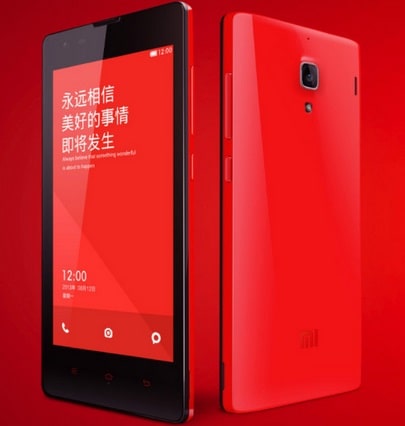 Xiaomi will launch its first set of Android phones Redmi 1S, Note and Mi3 in India on 22nd of July. Cheapest of the 3, 1S packs with a 1.6 gigahertz Snapdragon 400 processor from Qualcomm. It houses MIUI interface that replaces the phone’s Android 4.3.3 Jellybean OS default UI. The home screen of this device has a Taj Mahal wallpaper. It has a high definition display of 720p resolution, 4.7 inches size, Corning Gorilla glass protection.

The pixel density of the screen is within 300 to 305 PPI. 1S from Xiaomi is endowed with an 8GB of storage capacity. It comes with a MicroSD card slot and a 1GB of RAM thus heating up the competition of budget phones in the sub 5000 to 7000 Rs price range. This device flaunts a 1.3 MP shooter at the front and an 8MP BSI sensor at the back side.

The rear snapper is installed with LED flash and it can record 720p videos. The front camera can be used for making video calls and clicking selfies. 1S has a 2000 mAh battery backup. The mobile has an impressive Antutu benchmark score around 20000 and it carries a 5999 Rs price tag.

This phone under 7K has an Adreno GPU. It supports 2 SIM cards, 3G, WiFi, Bluetooth connectivity. This mobile allows navigation with Assisted GPS and GLONASS.

Unfortunately, this handset won’t be available for purchase again as Xiaomi has launched the 4G enabled Redmi 3s.

The specifications of this mobile were unveiled at an event held at Delhi and it will go on sale by the end of August.