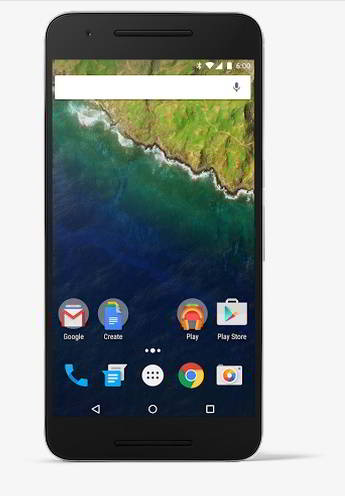 Google has launched its Nexus 6P smartphone. This new device has been manufactured by Chinese tech giant Huawei and it is being considered as the best camera phone ever. It runs Android 6.0 Marshmallow operating system that includes a bunch of new features.

The OS is intelligent. Its core modules have been redesigned. Thus, important processes consume lower system resources which in turn improves the battery backup of device that runs on Marshmallow.

Nexus 6P has been already listed in the Google store but it is not available for purchase as of now. If you want to be one of the 1st buyers of this handset, you can join the waiting list. Google will send you an email when 6P will be in the stock.

The Nexus 6P is can shoot clearly visible images even in very low light conditions because Google has added a 1.55 ultra pixel sensor equipped 13.2 MP camera to this handset.

The front camera includes F/2.4 aperture module and it has 8 million pixel sensor which is capable of producing FHD output.

The front and rear sensors are well supported by the latest edition of Google camera app.

Recording of 4K and slow-motion videos at 240 frames/second is possible with Nexus 6P.

As this is a specially designed camera phone, the laser-based autofocus system in this handset is incredibly fast and precise.

This phone comes with a stylish aluminum frame which is normally found in high-end HTC and Samsung devices. The presence of metal makes 6p a premium phone. Google Nexus 6P uses an AMOLED 5.7 inches display which measures 5.7 inches diagonally.

The screen has a very high-resolution i.e 4K or 2560 x 1440 pixels. The content displayed on it will be of crystal clear quality as the pixel density is within 500 to 550.

The Google Nexus 6P features version 2.1 of Snapdragon 810 processor from Qualcomm and a quad-core Adreno 430 GPU. Gaming on this phone will be a fun experience for the user. 6P has LTE 4G networking feature and a universal USB type C port is included in it. As a high-speed internet connection is supported, the user can enjoy RTS and MMORPG games without worrying about latency issues.

These days, fingerprint sensors are being added to all handsets that are priced above 10K and Nexus 6P is no different. Marshmallow OS supports this sensor very well.

Android Pay support is included as this phone has NFC option.

Nexus 6p is loaded with 3450 mAh battery. A stereo speaker has been added to its front side. This Google smartphone is just 7.3 mm thin. Considering the fact that this device has powerful hardware and a good battery, you can say that 6P has been designed to perfection. Even Apple’s Johnathan Ive will give a thumbs up to the Nexus 6P.

This smartphone has LPDDR4 3GB RAM which is faster and more energy-efficient than DDR3 and DDR2 architecture based memory units.

This Android 6 device is OnePlus 2 and iPhone 6 Plus, 6S killer. It is fast, powerful and a great low light photography device.

This Concept Intel mobile gives a glimpse of future smartphones