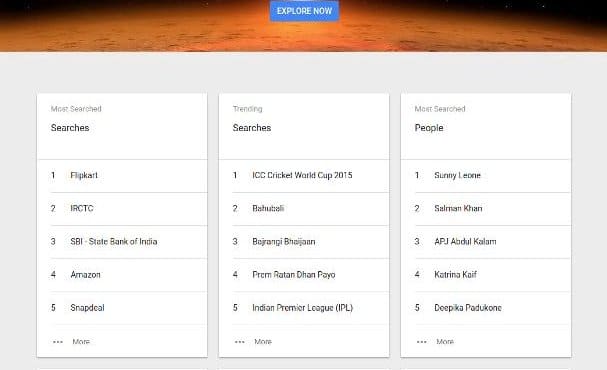 On 1st of Jan, people across the world will celebrate the new year. As expected, Google has shared a list of most searched and trending topics for 2015. This list is interesting and accurate because most people on this planet use Google as their default search service.

Sunny Leone, the actress appeared in a few films this year. People seem to have enjoyed her movies a lot as she tops the list of the most searched people in India. Salman Khan, the actor whose every film earned more than 30 million dollars is 2nd in the list. APJ Abdul Kalam, one of India’s greatest scientist and an inspiration for many had passed away this year. He is the 3rd most searched person in the sub-continent (As per Google Trends report). Lamar Odom and Charlie Hebdo were trending topics in the world.

What’s surprising is that Facebook, the website that claims to be an online home for over 50 million Indians is not ranked in Google Trends. Flipkart is at the number 1 spot, followed by IRCTC at the 2nd position. Amazon is ranked number 3.

Watching movies is a passion for many people in the world. Bollywood films are more popular in India than Hollywood movies. According to Google Trends, this year has been great for some south Indian directors as Bahubali, I, Puli were most searched films this year in India.

Jurassic Park, Furious 7 and American Sniper were the top 3 global searches in the movies category.

This year, a lot of quad core and octa core mobile phones were launched. Apple had also introduced its latest generation iPhone. Google claims that Yu Yureka, iPhone 6s, and Lenovo K3 Note were the top 3 most searched mobile devices in India.

Excluding Micromax, there’s no other device launched by domestic manufacturers in the list. Motorola Moto G and X play are on the list along with Lenovo K3 note, A7000, and A6000. Samsung Galaxy J7 is 7th most searched phones for 2015.

Best websites like Craigslist to sell your stuff online (2018)

Top 5 cool tricks to save data on iPhone and Android