The Internet is one of the most important services in the world. Without it, you won’t be able to open your favorite website nor will you be able to download apps or software for your PC. Although the Internet was invented for the benefit of the people, it is not free as telecom companies have to pay billions of dollars to the government for offering GSM, LTE or WCDMA services. These companies provide internet-connecting devices to customers. The devices are of 4 types i.e Wimax, Wireline, wireless broadband, dongles and SIM cards.

The 1st two devices have become outdated, but many people still use them. Wireless broadband services are good, but they come with a major drawback that internet connectivity option will be limited to just 1 room (or house/entire office if you’re using a WiFi router). When a user is traveling, he won’t be able to take the connection along with him. SIM cards and dongles are also used for surfing the internet and they’re a solution to the problem stated above.

SIM card in a mobile phone allows you to use 2G, 3G, and 4G services. You can use mobile internet on your PC or laptop, but you should avoid this as the battery in your handset will drain quickly (it might last for max 1 or 2 hours). If you’re searching for the best mobile internet plans, go through the below 2 articles.

Dongles are lightweight and they support connectivity with every computing device through a USB port. WiFi technology dongles are a little bit expensive, but they are worth the money because you can use their WiFi hotspot module to connect your phones and tablets with the internet. In India, Dongles are based on EVDO or 3G technology.

4G LTE technology-based devices have started to appear in the markets. EVDO data cards have lower download speeds (up to 2.4 or 3.1 Mbps). Data cards supporting 3G networks offer internet speeds up to 21 MBPS.

In India, dongles are launched only by popular and cash-rich telecom operator i.e Airtel, Reliance, Idea Cellular, BSNL and MTS (Sistema Shyam TeleServices). Their dongles support high-speed network connectivity. In our country, you’ll never get 21MBPS download speed. Anyways, if you’re in search of the best 3G or EVDA internet dongle plans, go through the below paragraphs:

Tata is no doubt a reliable company, but its broadband 3G tariffs are not pocket-friendly. For example, its 10GB prepaid plan costs within 900 to 1100 Rs. The company has launched several devices in Photon series and its plans/tariffs are almost the same. Here are the latest plans for the Gujarat Circle

To find tariff for your circle, visit the official site. 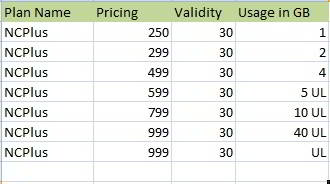 My first internet service provider was Reliance. In 2012, I had bought net connect plus dongle in Pune for around Rs 1500. The speed was good, but the internet browsing speed was not consistent.

All net connect Dongles of Reliance are manufactured by ZTE technologies and they offer speeds within 1.8 to 3.1 MBPS. They’re priced in the range of 800 to 1200 Rupees. As you can see in the above image, Reliance Dongle plans are same for all devices. For full information and latest data tariffs, visit the official website of the company.

MTS has better and cheaper plans than Tata Docomo and Reliance but the LAVA dongle they offer to the customer is of very cheap quality. MTS has a very reliable network in every state it operates. Its plans are different for each circle. After the FUP limit, the speed will be lowered to just 32KBPS.

Browsing the internet at such speeds is the worst experience for the user. I’ve used LAVA product provided by MTS broadband service. You can read my review of LAVA dongle (MTS WiFi Ultra) here.

The Idea cellular company has the most expensive dongle plans in India. Its 2.5GB plan is priced at 645 Rs. The validity of the same is 45 days. To enjoy 7GB data on Idea networks, you have to spend around 1400 Rs.

The unlimited 10GB plan requires a monthly commitment of Rupees 2000. I have never used net setter data card. Thus, I can’t comment on its speed and connection quality. If you’re a customer of Idea cellular, please share your experiences with us and other readers.

Bharat Sanchar Nigam Limited is a government company but its 3G dongle plans are not cheap. This is one major reason why BSNL is known as a struggling company. The 10GB prepaid 3GB plan is priced around 1K.

The CDMA data cards are worth the money because they offer unlimited downloads for just 750 Rs. The browsing speed will be up to 2.4 MBPS. The EVDA dongles will you cost you around 1200 Rupees. Postpaid and prepaid data tariffs are same.

Airtel has become the 1st company in India to introduce 4G services in over 150 cities. Its 4G dongle is priced at 1500 Rs. It supports prepaid as well as postpaid connections. The max speed offered by Airtel 4G is around 45 MBPS. Below are the plans: 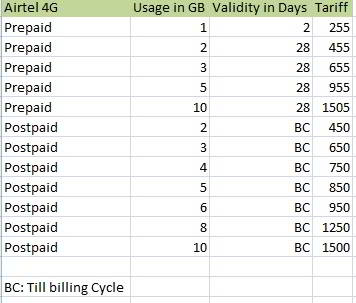 Tip: If you’re given an option to choose between Huawei or LAVA dongle, go with Huawei as they’re better in quality.

Conclusion: The above dongle plans are good, but they’re not budget friendly. If you want to use the internet at home or office, better go for a local Internet service provider like Tikona, ACT, Hathway, etc. Buy a data card if you’ve to travel a lot.

Google My Activity is a great new addition to your Google...