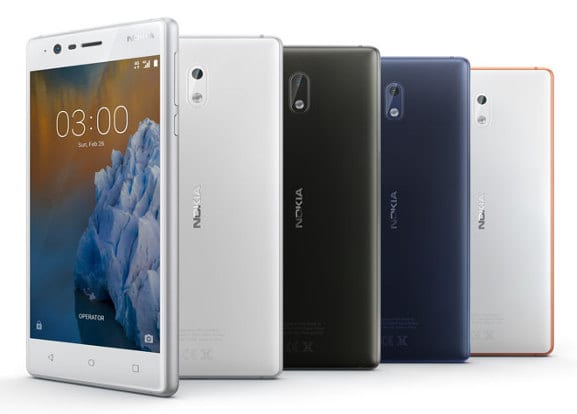 The MWC 2017 event has begun. This year, all eyes were on Nokia because the Finnish phone manufacturer had announced that it will launch new Android mobiles and the iconic 3310 feature phone in a new avatar.

Guys, the much awaited Nokia mobiles have been launched.

Nokia has already made a great comeback. It has sold 100K units of its first Android mobile for 2017, the Nokia 6 in China. Are the latest phones worth buying? Let’s find it out.

The mobile doesn’t support modern networking technologies such as WiFi, 4G-LTE or 3G. It has a 2 megapixels rear camera and a color 2.8-inch display of QVGA resolution.

The entry level 3310 handset isn’t waterproof. It is a durable phone which you cannot destroy easily.

If you were eagerly waiting for the launch of a Nokia phone under 10000 INR, then your wait will soon be over. The Nokia 3 is the 2nd cheapest handset introduced at the MWC event. Priced at $145 (9000 INR), Nokia 3 comes with excellent features.

Nokia 3 is a mobile that runs on Android Nougat OS and has 2GB RAM. It features a 5-inch HD display and a 64-bit MediaTek processor.

The screen’s highest brightness level is 450 NITS. It features 2.5D glass and a 16GB ROM.

The Nokia 3 phone has a back cover built with Polycarbonate material and includes a 2650 mAH battery.

The mobile encompasses a rear F/2.0 aperture lens equipped 8 megapixels full HD back camera and has a front 8 MP selfie camera. It is 8.5 mm thin and supports 128GB MicroSD cards.

This smartphone should do well in emerging economies where the demand for budget 4G smartphones is huge.

The Nokia 5 handset carries a price tag of 13000 INR and it offers better features than the above device.

It employs 2GB RAM and a 5.2-inch IPS HD display. It comes with an aluminum back cover and a 3000 mAh lithium-polymer battery.

The phone has an octa-core Snapdragon 430 processor manufactured by Qualcomm and carries 16GB storage hardware. Nokia 5 enables you to use 128GB capacity microSD cards and has a 13 megapixels back camera.

Nokia vs Samsung vs Xiaomi

Let’s compare the latest mobile of the three firms:

Xiaomi’s budget phone i.e. Redmi Note 4 is undoubtedly the best phone you can buy for below 15k and 10K INR. Samsung has sold 100000+ units of Galaxy On5 2016 mobile in India. If you compare the specs of On5 with Nokia 3, you’ll conclude that Nokia’s device is better.

Nokia and Samsung are top-class brands with a global presence. They have a strong offline presence in every corner of the world. Xiaomi is giving cut throat competition to Samsung in emerging markets. It is operating in 10 to 11 countries.

Nokia will be more interested in grabbing the market share of Samsung in the US, Europe, China, and India rather competing with Chinese firms like Xiaomi, Lenovo, Huawei, etc.

As Nokia is back in the game, it might pose a serious threat to Samsung. In Asian countries, Xiaomi will continue dominating unless Samsung or Nokia launch a device with great features.

The latest smartphones will hit the markets within a few months from now. Nokia will launch them globally.