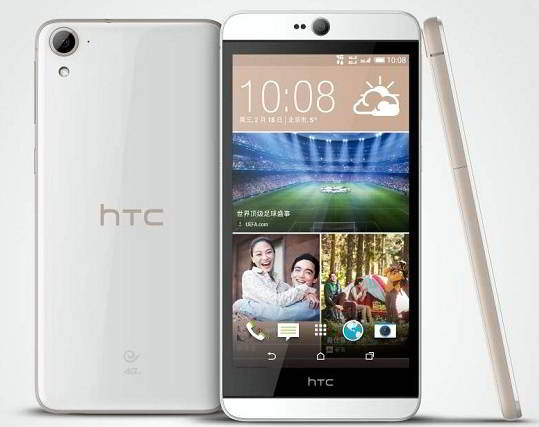 Desire 820 will be soon replaced by Desire 826 as the most powerful mid-budget HTC handset. This device was first spotted at the 1st CES event of 2015 but it was launched in very few countries. Mahesh Telecom has revealed that HTC is planning to bring the Desire 826 phone to India by the end of the 1st week of April. This price of this handset would be within Rs 26000 to 27000 Rs. 826 has a powerful selfie camera. This is probably its best feature.

The selfie camera includes a wide-angle lens along with a 13.0 MP back illuminated sensor and f 2.0 aperture. HTC has loaded a specially designed camera software (HTC eye experience) in its latest phone for the Indian markets. Thus, the image quality would be good.

The back camera has an ultra pixel sensor and f/2.2 aperture lens. It supports continuous shots, 1080p recording, and panorama. This phone from HTC features Snapdragon 615 8 core 64 bits processor. It has a powerful graphics processing unit in the form of Adreno 415.

Desire 826 packs with 128GB microSD card reader. It has 16GB flash storage and 2GB of RAM.

This HTC phone comes with a retina full HD 5.5 inches touchscreen display. The screen has a pixel density over 390. Desire 826 owners will get high-quality headphones. If you don’t want to use the headphones, you can still enjoy Dolby surround music as there’s HTC boom sound technology.

This lollipop phone has sense 6.0 UI, BlinkFeed, and Android Lollipop 5.0 operating system. It is a dual SIM octa-core handset. You can use 2 LTE Sim cards at a time. This HTC octa core phone will be sold in Blue, purple and white color options. It is a 7.49 millimeters thin phone that weighs around 154.9 grams.

HTC Desire 826 specs are good as M8S, the successor to One M8 phone is loaded with the same CPU and RAM module as this handset. M8S has a battery with higher power capacity and its cameras are powerful. Its price would be around 45k Rs.