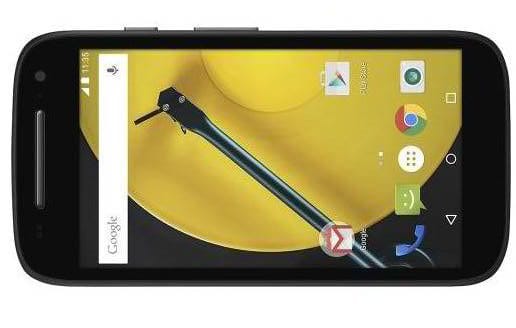 It looks like the successor to Motorola’s top-selling phone, the Moto E 2nd generation will be launched soon as the popular US retailer Best Buy has listed the handset on its shopping website. Best Buy has also revealed the 100$ dollar price tag (around 6000 Rupees) and complete specifications of Moto E2.

The upcoming Motorola phone will ship with Android 5.0 Lollipop operating system and it offers 4G-LTE connectivity. It will get Lollipop 5.1 and all upcoming Android updates released by Google.

The handset has quad-core Qualcomm 1.2 GHz Snapdragon processor. Best Buy has not unveiled the processor model and its architecture. But you can expect the Moto E 2nd Gen phone to feature Snapdragon 410 64 bit processor as this is the only low price Qualcomm chip that supports LTE.

The Moto E2 comes with a 4.5 inches touchscreen display with 540 x 920 pixels resolution and IPS technology. It has 5 megapixels back camera and a low-resolution VGA camera at the front. This Android Lollipop OS powered phone has an LI-ON battery of unknown capacity and 1GB RAM.

Meanwhile, in India, the Moto E price has been dropped to 5999 Rs. The phone was earlier priced around 7000 and it was in competition with LTE enabled Lenovo A6600. Its new price is very good and it will help Motorola in improving the sales tally of Moto E further.

We can expect Motorola to drop this phone’s price below 5000 when Moto E2 is officially launched in India. Which phone will you buy? Redmi 2 or the Moto E2? Please let us know your thoughts.

Update: 2nd Generation Moto E with latest Android OS (version 5.0) is now available for purchase. You can check its listing on Flipkart or Amazon.in.