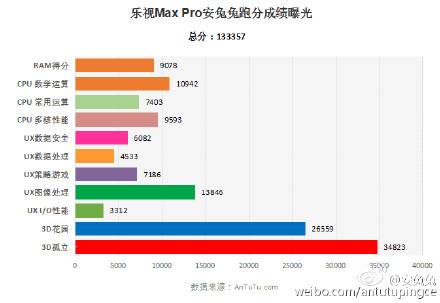 Antutu scores of Letv’s upcoming smartphone will shock the designers of Exynos 8890 Samsung processor. According to a picture shared on Chinese blogging platform Weib0, X910 scores well over 133000 points. This makes it the fastest and most powerful mobile device in the world.

Last month, the Exynos 8890 chip installed Samsung Galaxy S7 was subjected to a similar test. S7 scored around 103000 points and it was assumed that Exynos is better than Snapdragon 820. Qualcomm has proven that its product is the best.

Huawei’s latest Honor 8 phone that ships with latest Kirin processor had reported a decent Antutu score of around 79000. Thus, it is the 3rd most powerful phone. It will rank lower when some other top manufacturers unveil their handsets with the latest Snapdragon.

X910 aka LeMax pro seems to be the flagship product of Chinese manufacturer LeTV. It will in competition with Xiaomi Mi 5. X910 has some newest Qualcomm products. It includes quad-core Adreno 530 GPU and internal 64 GB ROM.

LeTV LeMax Pro has a quad high definition aka 4K 5.5 inch screen. It has a lot of RAM and ultra pixel resolution sensor in a front camera. Android M (6.0 Marshmallow) runs in X190. LeTV LeMax Pro is expected to cost half the price of Samsung Galaxy S7. It will have a powerful back camera installed with 21 MP UHD sensor. The sensor is likely to be manufactured by Samsung or Sony corporation. This smartphone is expected to be launched soon after the Xiaomi Mi5 is introduced in China.

LeMax Pro has proven that the Qualcomm chip is the most powerful processor for mobile devices. Samsung should be worried because 2015 was the year in which Exynos outperformed Snapdragon in every benchmarking tests. Qualcomm is expected to rule in 2016.

2016 seems to be the year of Qualcomm as the latest snapdragon chipset is reportedly being deployed in flagship phones from Sony, HTC, LG, Google, Xiaomi and many other manufacturers. The processor is a beast but let’s hope that doesn’t it suffers from the overheating problem.

IPod Touch 6th Gen short review: Will you buy it or...