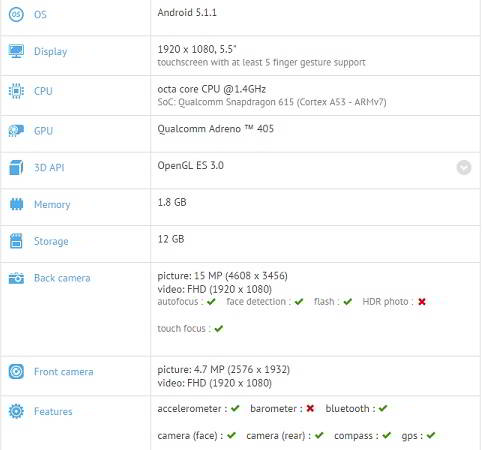 Samsung is expected to launch the Galaxy 8 phone (successor to Galaxy A7) very soon. This upcoming handset’s graphics handling ability report was published today on GFXBench site. After introducing Nexus 9, HTC is all set to introduce the H7 tab, its cheapest tablet till date. Some key specs of H7 were revealed last month by UpLeaks.

Today, this tab has appeared on the official website of Bluetooth special interests group. Zauba has claimed that 9 units of H7 have been couriered to New Delhi (India). The cost of a single unit is below 10000 Rs. Here are the expected features of Samsung Galaxy A8 phone and HTC H7 tablet.

The wait for a new powerful Samsung phone will be soon over. This Galaxy A8 phone has a Snapdragon 615 1400 MHz octa-core processor and it packs a full HD multi-touch display.

This upcoming Samsung phone comes with 15 megapixels back camera that supports 4608 x 3456 pixels resolution. A full HD camera with 4.7 MP sensor has been fitted at the front of Galaxy A8.

This phone runs Android 5.1 OS and it has NFC chip. Battery and SIM card connectivity details of Samsung A8 are not available at this point in time. The price of this handset should be within 20000 to 25000 Rs as HTC 826 with similar specs is retailing in the same price bracket.

HTC H7 has ordinary features. Thus, the pricing around 10K seems to be unreasonable. This tab has a quad core CPU and a 7 inch IPS display. H7 packs with 2 SIM slots, 16GB of storage and 1GB RAM. It is expected to support 3G, Bluetooth, voice calling and WiFi.

HTC’s previous tablet, the Nexus 9 was a big disappointment for the company and H7 tab seems to be going in the same direction unless it’s priced under 7000 Rs.