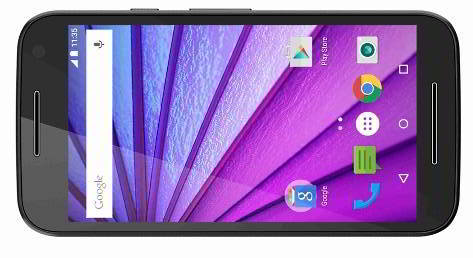 Motorola was a struggling company when Nokia and Apple were dominating the phone markets. Its fate had turned around when the company had introduced Moto G, X and E Android phones in 2013. These devices became even more popular when their successors were introduced in 2014.

2 years have passed, Moto X, E, and G are still ruling the markets of some countries. In some parts of the world, Motorola has reduced the price of its Android phones. This is because of the fact that the new generation of Moto handsets will be made available soon.

Well, Motorola has recently sent press invites to several online publications for the official launch event of Moto G 3rd generation. The event will be held in India on 28th of July. If you’re curious to know what these new Motorola phones will offer, go through the below paragraphs.

A 2 minutes video has been recently leaked online and it reveals some important features of Moto G 2015 that you might want to know. According to the video, the upcoming phone has 13.0 megapixel rear and 5.0 MP front cameras.

Moto G 2015 is an IPX7 certified device that has 4G LTE connectivity option. It includes 5 inches screen (with expected resolution of 1280 x 720 as the battery capacity is below 3k). It features Android 5.1 Lollipop OS and it might be one the 1st phones to get Android M update. There’s quad core 1400 MHz processor in Moto G 2015. The SoC and GPU are expected to be supplied by Qualcomm.

A Reddit user has shared a screenshot of the moto maker tool that will allow users to select the perfect color combination for their phone. The user has claimed that the tool was published on Motorola’s official website.

According to the image, Moto G 3rd Gen will be available in 2 front panel color options i.e Black and white. The back cover will have 7 color variants. The screenshot has also confirmed the 2GB RAM and 16GB internal storage modules in the Moto G3.

As it is the latest flagship Motorola phone, Moto X 2015 is expected to include Snapdragon 808 or 810 SoC. The 1st chip has 6 processing cores and the 2nd has 8. Snapdragon 810 has been suffering from the overheating problem (when it is not underclocked).

Many top companies have ditched this chipset because of the same issue but OnePlus has decided to stick with the most powerful and best Snapdragon processor of 2015.

This flagship smartphone has Adreno 420 graphics. Its screen is 3 inches longer than Moto X 2nd gen. The resolution is 2560 x 1440 and the pixel density of the screen is well over 400. This phone is powered with a fingerprint sensor.

There’s latest Lollipop OS along with 4GB of RAM. This handset from Motorola might be introduced in 64GB and 32GB storage capacity variants. It is expected to have 20+ MP rear camera.

The Moto X 3rd gen will give a cutthroat competition to the upcoming OnePlus 2 phone if it is priced around 28K. But this seems to be unlikely as the earlier version of this phone is now available for within 22k to 28K Rs range. [Image source]