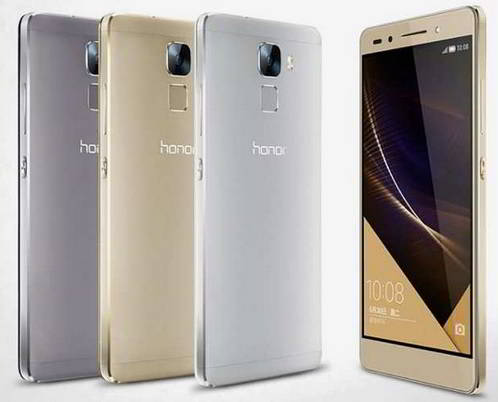 Chinese tech giants Huawei and Meizu have unveiled their latest high-end phones. Huawei’s handset is the successor to Honor 6 i.e Honor 7 and Meizu’s device is MX5. Both these mobiles will be launched officially by the end of July 2015 in the domestic markets of Huawei and Meizu for within 21000 to 25000 INR.

Huawei’s octa-core HiSilicon chip in Honor 6 has been improved and it should be now considered in the same league as latest Mediatek and Snapdragon processors. The new CPU is named as Hisilicon Kirin 935 and it has clock speed within the range of 1.5 to 2.2 GHz/sec. It is employed by Honor 7.

Multi-touch gesture support is enabled as well. Huawei Honor 7 has better camera hardware than that of its predecessor. There’s 20.69 megapixels UHD resolution compatible sensor along with 8.0 MP FHD selfie camera. Both cameras are paired with LED flash and their sensors are manufactured by Sony.

This phone from Huawei comes stuffed with up to 64GB storage (16GB model will be available too) and 3GB RAM. There’s microSD card expansion slot too. The battery of Honor 7 phone is nonremovable lithium polymer type and its capacity is 3150 mAh.

On another hand, Meizu has used MTK6795 2200 MHz processor in its flagship device. It has also added a latest PowerVR graphics chip alongside 3GB RAM to the MX5. This Meizu phone boasts a metal body and a full HD IPS 5.5 inches display protected by Corning Gorilla 3 glass. There are 401 pixels per inch on the display.

MX5 has a 5.0 MP 1080p camera at its front. Its backside flaunts dual LED flash along with a similar 20.7 MP sensor as the Honor 7. It supports fast charging technology. The flagship Meizu phones are well known for their high Antutu benchmark scores. MX5 might break the record set by MX4.