Nokia may launch four low-budget phones in the coming weeks. Geekbench revealed vital details on the upcoming mobiles, which Nokia has codenamed (or officially named) as D1C. Nokia announced its plans on making a comeback in August this year.

Information revealed by Geekbench is correct most of the time. So, don’t think that the details on Nokia D1C phones you’re about to read is fake.

The new Nokia phone comes with newest hardware components. The notable features as per the listing of Geekbench are as follows.

Nokia D1C mobile packs with the first octa-core SoC in Qualcomm SD 400 series of processors. It has a high-performance Adreno 505 GPU which supports playback/recording of 1080p resolution videos at 60 FPS.

According to Qualcomm, Snapdragon 430 offers quick-charging 3.0 technology support. QC3 is 35% faster than QC 2.0. 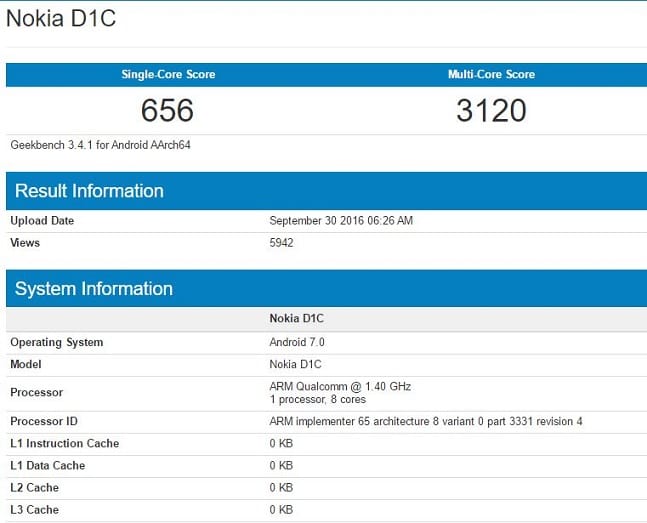 Nokia D1C will have two 4G-LTE SIM card readers. It is a 64 bits handset with dual-band WiFi system.

Nokia D1C may have 3GB RAM along with the latest Android Nougat operating system. It packs MSM8937 motherboard and has excellent benchmark score of 3120 in multi-core benchmark tests.

The phone may have a full HD rear camera and a wide-angle HD selfie camera too. Nokia D1C price should be within 7K to 12k INR. If this happens, Nokia’s comeback in 2016 will be a successful one.

Here’s what Nokia should do to reclaim its top position.

Foxconn is one of the largest contract phone manufacturers in the world. If the cost of manufacturing handsets in Nokia’s home country i.e. Finland is exorbitant, collaborating with Foxconn will help in reducing costs.

Nokia became a popular brand because it focussed on launching cheap phones priced within 3000 to 12000 range. Microsoft-Nokia priced the Windows 10 and Windows 8.1 phones within budget. Because of the average features, the devices didn’t help Nokia revive as a top phone brand.

Nokia may have learned plenty of lessons during its partnership with Microsoft. Hence, this comeback will be big.

Nokia should follow the strategy employed by Chinese firms like Xiaomi, Lenovo, Huawei, Coolpad, etc. Revenues of companies who have focussed on the US and European markets have plunged by 40% in the last 3 to 4 years.

Nokia may introduce its first set of phones soon after Google releases Android N update for Nexus phones. Are you excited? According to some reports, the Finnish tech giant has plans to launch a few tablets too. Nokia N1 was the last tab that Nokia had launched.