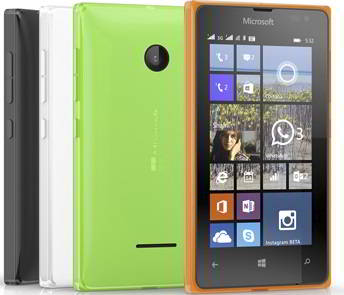 Share
Facebook
Twitter
Google+
Pinterest
WhatsApp
Microsoft has just announced that it would be adding 2 new budget 3G phones Lumia 532, 435 to its Lumia series. These 2 handsets would cost buyers less than 100$ and they would feature Windows Phone 8.1 OS. They’ll be shipped with the Lumia Denim patch for better stability of the OS. When launched, Lumia 435, 532 would take on cheap Windows phone in the 70 to 100$ price range. Well, this is the latest attempt by Microsoft corporation to bring Nokia back on the track.

The handsets would be introduced as single and dual SIM devices with Snapdragon Qualcomm processor. Lumia 435 features the Snapdragon 200 dual-core 1.2 GHz chip. Lumia 532 has Snapdragon 400 processor.

The dual-core CPU in Lumia 432 is a bit old but when it comes to multi-tasking, it has already proven to be a solid performer. Microsoft has also introduced Cortana in Lumia 532, 435 phones.

Cortana is Microsoft’s latest digital assistant for all computing devices running the latest version of Windows OS. The digital assistant would be first made available for the users in English speaking countries like US, UK, etc.

These 2 latest Microsoft phones sport a 4 inch IPS LCD. They boast a resolution of 480 x 800 pixels. Lumia 435 includes a 0.3 MP front and fixed focus 2.0 MP camera. Its weight is around 133.9 grams. Its sibling weighs 139 grams and packs with VGA front, 5.0 MP back camera. The handsets have 8GB ROM and they support microSD cards with 128GB storage memory. They feature 1GB volume of RAM and a replaceable battery of 1560 mAh capacity.

Microsoft is expected to launch at least 15 Lumia series phones this year. It has recently launched the Nokia N1 Android tablet in China. The first stock of the tablet was sold out within 5 seconds. Stay tuned as we’ll keep you updated with the details on the latest Windows phones and tablets from Microsoft.