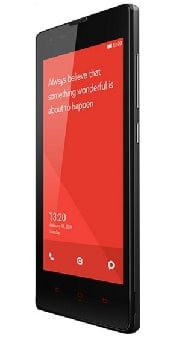 Xiaomi has slashed the price of its upcoming Android phone, the Redmi 1s just before its launch. The official promotional picture released by the phone maker proves that this device will be priced below 6000 Rs. It will thus compete with the likes of Zenfone 4 which carries Rs 5999 price tag. When compared the Zenfone, this Xiaomi phone offers better specs to the users.

It is installed with a quad-core Snapdragon SoC. Zenfone 4 has a dual-core CPU. 1S from Xiaomi boasts an HD touchscreen just below its front 1.3 MP camera. It houses a 1GB RAM, 2 SIM card slots and a battery rated at 2000 mAh.

This Xiaomi phone within Rupees 5500 to 5999 features a Dirac HiFi sound system along with FM Radio, 3.5 mm audio jack. It is loaded with MIUI interface and Android 4.3 jelly bean OS. The phone’s screen is 4.7 inches long. Its surface is made up of dragon tail glass.

The way Xiaomi is launching affordable devices with powerful specifications, it looks like the Chinese company will dominate the budget phone markets in the coming months. Xiaomi Redmi 1s will be sold online through Flipkart from September 2 onward. To buy one unit, users will have to register an account with the retailer. The company has also revealed the price of 3 new Redmi 1s accessories. The flip and back cover will cost you 559 and 459 Rs. The screen protector will carry a price around 180 INR.