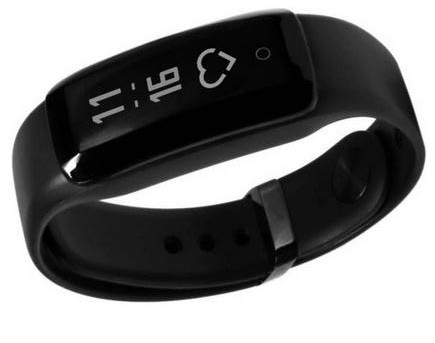 iVoomi, the Chinese smartphone and accessory manufacturer has launched FitMe, the company’s first fitness band in India. iVoomi’s new gadget has a stylish design and it is ideal for both genders of the population. FitMe is water resistant as it has passed IP67 tests.

Built with silicone, iVoomi Fitme is a great companion for the people suffering from Asthma and other lungs related ailments. The health band makes users aware of the Air Quality Index of the town/city where they’re currently staying. When the pollution level is high, you can prevent yourself from getting sick by staying at home.

FitMe boasts a touchscreen OLED display. It packs an HRS3300 sensor which monitors the user’s heart rate in real-time. The band syncs the data with the Bluetooth enabled mobile device. To use this feature, the user must install the FitMe mobile app. The application generates a beautiful graph from the synced data. It does this every 15 minutes.

Another cool feature of the iVoomi FitMe health band is its ability to track your steps. To know the number of steps you’ve walked, wear FitMe for the entire day or when you’re jogging/running.

Apart from steps, FitMe displays the number of calories you’ve burned when you were exercising, running, walking, etc. It also tracks the user’s sleeping pattern and generates a powerful graph from the collected data. The health gadget supports GPS navigation technology.

Sitting for several hours is bad for health. iVoomi FitMe vibrates when you sit idle for several continuous hours. The fitness band’s app provides an option to the “Idle sitting time” value.

When you pair FitMe with a mobile phone, you can track the phone’s location. The band supports Facebook, WhatsApp, Skype and many other applications. It has an alarm clock utility and an option to set/share daily targets.

iVoomi FitMe ships with a 90 mAH capacity lithium-polymer battery which takes up to 2 hours to get charged. This device lasts for up to 120 hours on a single charge.

Fitme displays notifications/alerts when your phone gets a new SMS or email. The new iVoomi gadget carries a warranty of 365 days. It weighs 24 grams. The band costs Rs 2000 and it is listed on Flipkart in two color options.

Best Bluetooth speakers in India for every budget