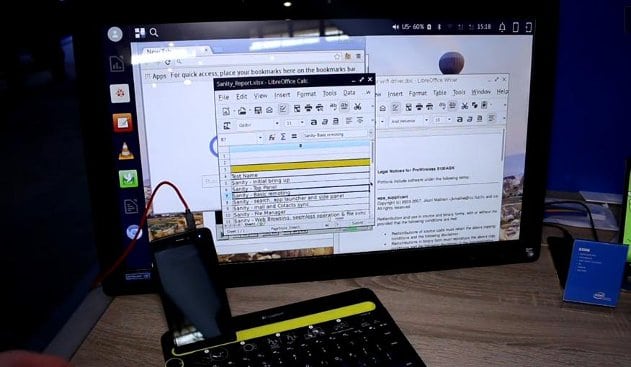 Although Microsoft Continuum is a good feature, you won’t be able to run your favorite desktop software on the Windows phone. Beta news had reported that you couldn’t run two apps at the same time in the Continuum mode.

There are many more limitations which you’ll come across only when you use a Lumia device or these upcoming phones. Microsoft will fix the problems as the users report them.

The buggy Microsoft Continuum will soon have an alternative. Intel has unveiled its concept phone that can run several desktop applications and Android at a time. Folks managing the WinFuture blog were given an opportunity to test the concept device at the MWC event Barcelona. While testing, the bloggers found that the Intel phone is loaded with stock Android 5.1 OS.

The Concept Intel mobile phone has an app to turn on the big screen feature. When the blogger opened this app, the handset’s screen entered into the standby mode and the monitor displayed the Linux OS running the open source Libre Office Calc, Writer, VLC media player, and Google Chrome applications.

The blogger claims that the OS is Linux Debian. Applications were responsive and resizable. The phone was running the Android Lollipop and Linux OS at the same time with the below hardware configuration:

Intel had launched the X3 SoC to low-end mobile devices. The concept mobile carries a 100 dollar price tag. It has proved that the Debian OS X3 chip is much more capable than low-end Mediatek or Snapdragon processors and the Microsoft Windows 10 handsets.

The concept phone was running Debian and Android. If operating systems like STEAM are incorporated in a mobile phone, you might not need a gaming PC. Future Smartphones will have the hardware to run today’s complex video games like GTA V, Far Cry, Crysis, etc.

Although Intel has demonstrated the new technology, we’re not sure when Intel will commercially launch handsets capable of running the desktop Linux OS and Android. The concept is fantastic, isn’t it?