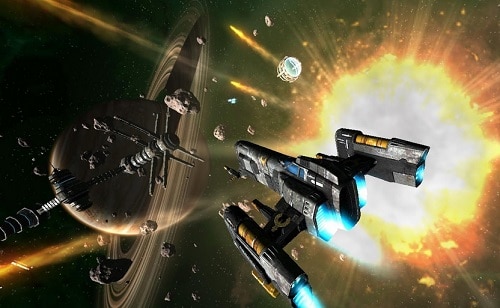 In role-playing games, the user must control a mighty hero and complete several tasks. The games have plenty of levels, interesting plot, several heroic characters and many powerful objects. The gameplay in RPG games is interesting. The Google Play Store has 1000’s of apps in this category, but most of them are crappy.

Here’s our list of top role-playing games for Android mobiles and tablets.

Eternium is a free Android RPG game that was published in the Google Play Store in 2014. Within 3 years, it has become one of the most downloaded Role Playing Games.

Eternium has a great rating of 4.8 on the Play Store, thanks to the amazing in-game graphics and an amazing storyline that users enjoy for free.

Eternium is inspired by classic RPG desktop games. The game enables you to play as a hunter, magician or a warrior. The 3 characters have up to 20 skills. The character gains new skills when you complete a mission.

Once you choose a character, Eternium will take you to a beautiful imaginary world that features mountains, dark caves, deep forests, castles where you’ll have to fight against demons, zombies, dragons, etc.

Zenonoa is a free RPG that takes users in a situation where rich people have started to torture and use the weak for their benefits. In Zenonia 5, the user will have to play the role of a hero who comes from a poor background. The character is brave and he can do anything to save his countrymen.

This hero can be armed with various weapons, and he can learn new skills. The user will have to guide the hero through different levels wherein he’ll have to find new objects and solve various mysteries.

The user has the option of choosing up to four characters. Zenonia 5 has nice graphics. It runs on Android Nougat, Marshmallow, Lollipop and Kit Kat OS powered phones and tablets. If you’re a fan of Japanese, Korean Anime characters, you will enjoy this free RPG thoroughly.

DOT is one of the top RPG games on the Google Play Store. It is based on a character who has traveled to a new world which is being constantly invaded by deadly robots. The world has texel tribes, and the player has to protect them from the crazy robots.

DOT is based on an interesting story, and it has cool graphics. The character can be controlled by the Android swipe gestures. This game can run on Android 2.2+ OS running phones and tablets.

Gameloft is a top developer on the Google play store, and this game is one of the company’s most popular products.

Dungeon Hunter 4 takes you on an adventurous journey through 4 different fighters. Each warrior has its unique capabilities to take on enemies and demons.

This RPG has beautiful graphics, and you can install it on Android 2.3+ OS tablets and phones.

If you love playing games that involve aliens and spaceships, then Galaxy on Fire is just for you. In this free Android RPG, you control Keith Maxwell and a spaceship. You’ve to protect the galaxy from pirates of the space, crazy aliens, and many other enemies. Galaxy on fire has stunning effects and clean graphics.

According to the developer of DR, this free RPG has powerful graphics that resembles a high-end PC game. In Darkness Reborn, the user must defeat the devil’s army by playing a warrior character.

The user can customize the characters. The character can learn up to 1296 moves. This RPG allows you to add friends so that you can increase your fleet’s strength and use it strategically against the opponent. Darkness Reborn features Dungeons, dragons, and much more strange creatures.

The objective of the users playing this free RPG is to protect a stone from prying eyes. The stone has magical powers, and a superhero owns it. Some infinite creatures and monsters are after it. In SOL, you can customize the weapons as well as the hero.

SW is one of the most downloaded and top rated RPG for Android devices. In Summoners war, you’ll have to join the forces who are battling for Mana Crystals. You’re given a chance of building a fleet of monsters that are ready to sacrifice their lives for the crystals.

This game allows users to choose one character from 800 characters. When a character survives for a certain duration, his skills will be upgraded automatically. Your team can have maximum 25 characters. This RPG supports 14 languages. It allows you to buy additional items via in-game purchase modules.

WD RPG game gives you the freedom to command a place named Woodbury. You must control that place so as to put an end to the governor’s cruelty.

The RPG lets users choose the characters that should live in Woodbury. The users have to build an army of survivors to defeat the governor. This RPG is based on walking dead comic book.

Conclusion: If you love playing action-packed role-playing games on mobile phones or tablets, install the above apps and enjoy high-quality graphics and intense action. There are some paid games that you can try out as well. For example Final Fantasy 7, Dragon Quest 8, etc.

mSportz from Tech Mahindra is a twitch alternative for mobile gamers