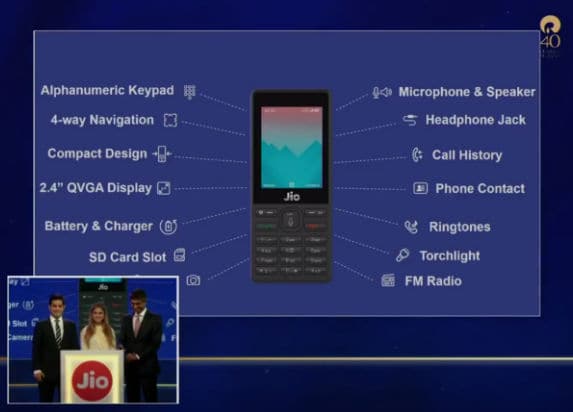 Although it’s a new player, Reliance JIO has been giving nightmares to top three telecom firms ever since it launched 4G services across India.

To increase the user base, JIO had launched a bunch of low budget/mid-range mobile phones and free 4g plans. The mobiles are out of stock on all eCommerce portals but the excitement of customers was never down because RJIO kept announcing cheap 4G plans at the Reliance Annual General Meetings despite Airtel’s repeated complaints against JIO to TRAI.

To make the situation worse for leading telecom firms and manufacturers of entry-level phones, Mukesh Ambani, the chairman of RJIO has unveiled its free 4G phone at the latest AGM. The mobile is free but you’ve to pay a deposit of Rs 1500 to own it. RJIO will refund money back to your bank account or wallet app after 3 years.

Although JIO phone is cheap, it provides several features. The mobile is NFC enabled, which means you can use it to make payments at shopping malls, big grocery stores, etc.

The JIO phone has FM Radio function built in. It packs a SpreadTrum S9820 or Snapdragon 205 SoC. It includes a MALI or Adreno GPU. Unfortunately, JIO will launch only one variant of this handset. The only way to know what processor or GPU in your phone is using is to unpack the mobile. You must avoid doing so as it may void the warranty.

The best feature of this handset is its ability to connect with JIO 4G networks. According to internet speed testing sites, JIO provides 5 to 17 Mbps data speeds. 4G speed on a 1500 Rs phone sounds great, isn’t it?

The mobile flaunts of a 2.4-inch QVGA display and includes a headphone jack. It features a 4-way navigation system for selecting apps and an SD card slot that supports 128GB SD cards. The JIO mobile includes two cameras, a 2.0MP rear, and a VGA front camera. It packs 512MB RAM and a storage memory of 4GB.

The JIO phone comes with torchlight function and has a compact design. It features a digital voice assistant function. As of now, it’s not clear whether the Jio handset supports WhatsApp, Hotspot, and other popular instant messaging apps. It is likely to be preloaded with JIO apps.

Reliance has introduced three special plans for its entry-level phone. The cheapest plan costs 24 INR and its validity is 2 days. The JIO 153 Rs plan comes with a 28 or 30 days validity. Both plans provide 512MB data per day. The weekly plan, priced at 54 INR offers same benefits as the other 2 plans.

The mobile will be available for pre-booking from August 23 onward. It will ship to customers starting from September.