This month, Reliance Communications became the 2nd Indian telecom operator to introduce the unlimited calling plan by launching the special Rupees 149 pack. According to the official press release published by RCOM, the new pack enables users to make STD or local calls free of cost for a month. It also provides over 100 megabytes of free data.

Reliance introduced the new pack after learning that its subscriber base has fallen by several thousand customers. One of the major reasons for sharp fall in customer base is Reliance terminating its CDMA Services. RCOM forced customers to upgrade from CDMA sim to 4G-LTE SIM card.

The move by RCOM didn’t go well will the CDMA subscribers and they moved to other carriers.

The Rs 149 pack may fetch Reliance millions of new customers. The best thing about the plan is that it doesn’t force you to upgrade from 2G, 3G device to a 4G handset.

You can activate it by the dialing Reliance USSD code or by contacting the customer care center.

Contents hide
1 Why RCOM’s unlimited 149 plan is worth the money?
2 Related Posts:

Why RCOM’s unlimited 149 plan is worth the money?

No need of 4G mobile: RJIO, the fastest growing telecom company in India requires users to own a 4G mobile phone. If they don’t have a 4G VoLTE device, they cannot use the unlimited free calling feature. The telecom operator uses Voice over LTE technology to let users make free calls.

Free Roaming: Telecom operators usually charge the customers for making or receiving calls when they’re not in the home circle. RCOM 149 unlimited plan makes roaming calls free. However, the firm may charge you for an outgoing call.

Free data: Once you recharge your Reliance Communications number, you’ll enjoy up to 300 megabytes of high-speed 4G-LTE, HSPA 3G or GPRS data.

If you’re an existing Reliance Communications subscriber, you may know that RCOM changes plans and data packs often. The Rs 149 pack is attractive but the customers planning to port their numbers to RCOM may be asking the following question to themselves?

Well, only the time will answer these two questions.

In case you’re an RCOM subscriber, make sure that you leverage the new plans to the fullest. 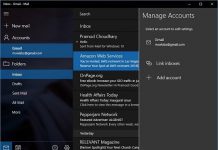 How to pin Gmail or Outlook to Start Menu in Windows 10?

Camera could not be opened error in Android apps [Solution]

IT Companies in Pune, India – List of Top Best Software...