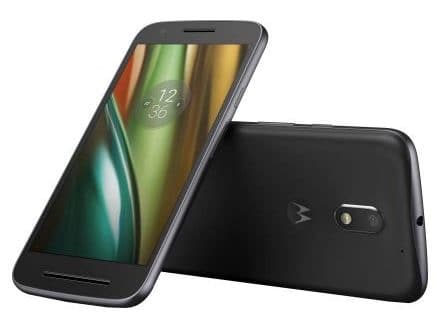 Motorola, in partnership with Flipkart, has launched its newest 7500 to 8000 Rs range Moto E3 Power mobile in India. The handset has modest features, but the brand power of Motorola-Lenovo and a large battery makes E3 one of the hottest devices in the markets.

The mobile comes with VoLte support making it compatible with carriers that support free unlimited VoLTE calls. It has the stock Android Marshmallow OS. It packs a juicy 3500 mAh battery and ships with a rapid 10 watts charger. According to the Motorola, charging the phone for 15 minutes makes it qualified for 5 hours of usage.

When it comes to computing the Moto E3 Power phone doesn’t have a Snapdragon processor. It has an MTK processor with a low clock speed of 1000 MHz. The handset’s predecessor had SD 400 CPU and it was moderately successful. E3 Power includes a Mali GPU for a decent gaming performance.

The Moto E3 Power boasts an HD resolution on its 5 inches display. Its chassis has a special coating that prevents moisture from entering the phone and rendering damages. It has two cameras. The rear unit has an 8MP sensor and it supports a wide range of functions including zoom, flash, HDR mode, etc. The handset in the Moto E series has a front good resolution 5 MP camera.

The low-end MediaTek processor and a big battery make the handset good enough to last for up to 48 days on a full charge. Moto E3 Power is an excellent phone for normal tasks such as watching videos, playing HD games, messaging, etc.

Moto E3 costs Rs 7999 on Flipkart. It is Flipkart exclusive which means that Amazon, Snapdeal may not list the phone sooner or later.

The seller is offering the handset with exciting freebies and exchange offer that can avail you a massive 7000 Rs discount. If you buy the phone with SBI credit and debit card, you’ll get flat 800 Rupees off. You’ll also get a 32GB SanDisk MicroSD free.

Trust: Motorola is one of the few companies which you can trust blindly.

Updates: Motorola makes sure that latest Android updates are available to all its devices regardless of their price range.

Design: E3 Power design is similar to that of Moto G4. It seems to be a toned down version of G4.

Few things that we don’t like about E3 Power (Cons)

SD card: As per its official listing, the Moto phone does not support high storage MicroSD cards.

Processor: E3 Power uses a processor which is found in mobiles that are priced below 6000 Rs.

No fingerprint sensor: Although the price tag of Moto E3 is just below 8000 Rs, the mobile lacks a fingerprint reader.

Apple’s latest iPhone 7 is a killer phone that you’ve been...