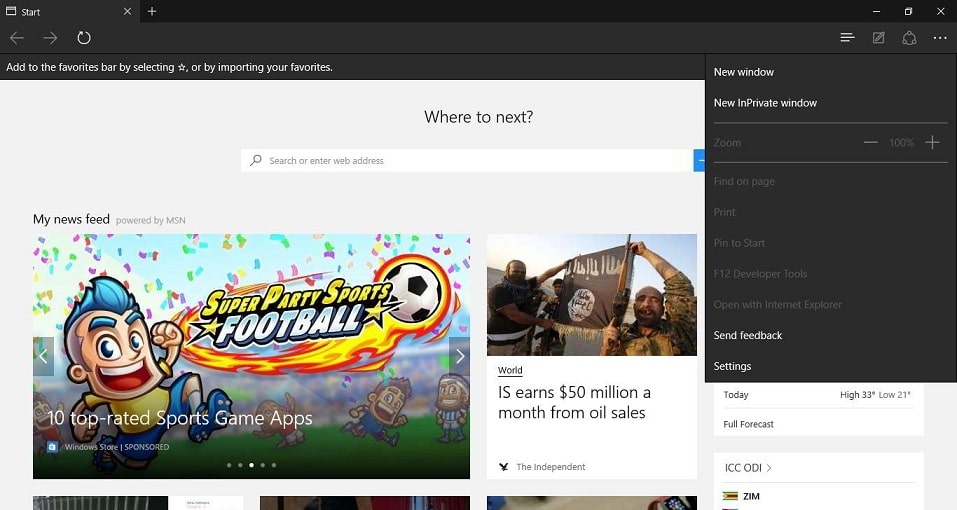 Microsoft Edge was officially launched with Windows 10 operating system and many people (including me) believe that it is one of the best software product from Microsoft Corporation.

The Edge browser has been recommended by well-known tech experts. Right now, it is one of the best alternatives to Chrome and Firefox.

Before Edge was launched, I had given up using Firefox and switched to Chrome. After installing Microsoft Windows 10 on my laptop, I’ve started using Edge alongside Chrome. Edge has cool new features. Most importantly, it loads websites quickly.

Google’s desktop browser was the best in the world until Microsoft unleashed Edge. Now Edge is giving Chrome and Firefox a run for its money.

I believe that speed is not the only factor that makes any browser the best. Today I’ve shared a detailed comparison of Microsoft Edge and Google Chrome. We’ve shared details on every module of these two applications. Go through the below paragraphs and decide which is the best browser among the two. We’ve compared browsing speed, features, UI, memory and CPU utilization details for you.

Edge vs Chrome Browsers: Comparison of the top features

When Edge browser was in the development stage, Microsoft had claimed that its users will be able to install extensions for a better experience. Edge has been launched along with Windows 10 but it doesn’t support extensions yet. According to some news websites, Microsoft is working on this feature it will be available in the next version of Edge which has been scheduled to be launched by the end of December 2015.

Google Chrome was launched as Mozilla Firefox alternative, and it has become the most used web-browser. Third-party developers are allowed to create and publish their plugins on the Chrome store. This store hosts millions of plugins for every purpose.

One of the most downloaded and used plugins is Adblock. If a user has installed Chrome for PC, they can easily install the ad blocker without any charges. Microsoft Edge displays adverts on all the websites. To block ads on it, You need Kaspersky Internet security’s anti-banner module or Adguard software. These two applications are not free.

The internet explorer browser was considered among the worst of all time because of its poor website loading speed and security bugs. No matter how well the site has been designed, IE takes ages to load it. Edge, on the other hand, loads websites at blazing fast speed. It opens quickly in Windows.

Sometimes, you get a feeling that Edge is much faster than Chrome. Thus, you’ll make it as a default browser. But when you get excited and open more than three websites, Edge will stop responding, but it will not crash.

If a page has become unresponsive, this browser will report it to the user. Let’s hope that this bug is fixed in the next Microsoft update for this browser. EdgeHTML rendering engine powers edge. It doesn’t support ActiveX, Visual Basic scripts, SilverLight, etc.

Google Chrome offers smooth browsing experience. I’ve been using it for 5 to 6 years every day; I’ve never encountered any bugs with it. The only issue I faced was that an adware infected chrome. When I opened a website, the ads were all over the place. They were bypassing the powerful filters of Adblock. I had to reinstall browser to get it working again. Chrome renders web pages with Webkit based Blink engine.

Chrome supports website notifications. This first version of Edge is not enabled with this feature.

Many people have tested Edge and Chrome on the computers with a benchmarking software like PeaceKeeper, Jetstream, Octane, etc. Their results have proved that Edge is faster. Like many other folks, even I use Edge, but I don’t open too many websites in it at a time.

Edge, like its predecessor IE, does not offer any customization option. It allows you to switch between light and dark themes. These two options will make the UI of the Edge Browser white or black. People have their color choices. Thus, they might find the default theme of Edge ugly or too bold.

Chrome lets you download third-party themes and use them. As competition between the third party developers is fierce, you have the option of downloading the best templates from the Chrome store. If you don’t like the theme, you can easily replace it with the other. Mozilla Firefox also allows you to do the same.

The tab and the address bar in Microsoft Edge are bigger than that of Chrome. Thus, available space for displaying and loading website content is a bit low in this browser. The back, next and refresh buttons are at the same position in the two browsers. The main navigation, i.e., the menu is located below the exit/close buttons of the browser.

The favorites bar aka the bookmark bar is hidden in Edge by default. You can enable it from the settings. This bar seems to be over-sized, and it reduces the available space for website content when you activate it. Chrome and Microsoft Edge allow you to import bookmarks from other browsers. This is a handy feature when you’re planning to replace Opera, Safari, Chromium with any of these two applications.

When the Edge browser is active on your PC, it will display top news and latest stories on the homepage along with a search bar. Bing is the default search engine provider in it. The user can replace it with Google or any other website.

Chrome is integrated with many Google features. It has a single sign-in feature through which the user will be automatically logged in all of their active Google services.

To save data, you can install Data saver extension which routes your files through Google servers. Before data is sent to your PC, the server compresses it.

Edge gives you easy access to downloads, browsing history and bookmarks folder. If you want to check these modules, click on the three horizontal bars icon located next to the favorites button. Edge will display the data in a small window on the same tab.

Chrome has a separate interface for each of these modules. Download, history details will be loaded in a new tab. This feature will not affect your browsing experience, but some people will not like it because they’re forced to visit a new tab.

Consumption of these two computer resources will increase when you open more than one websites. If a portal is laden with a lot of JavaScript or jquery calls, the browser will have to execute them because JS is a client-side scripting language. The browser handles it, and it can increase the browser’s processor and RAM usage.

Have a look at the below screenshot of the performance tab of the Windows, Task Manager. You can see that I’ve opened Facebook, Twitter, and techwayz.com in Chrome and Edge browsers respectively. The picture clearly shows that Chrome is consuming more RAM than Microsoft Edge.

For computers with 2 or 1GB RAM, it will be difficult to run many applications when Chrome is active on their machines. Google will be launching a newer version of its browser. The next version of Chrome will use less RAM, and it will be processor friendly.

Both Edge and Google Chrome let users explore websites in a secure and private environment. When the user enters into private browsing mode, the user information will not be tracked, cookies will not be implanted on your PC and the JavaScript/CSS files of websites will be discarded immediately when your browsing session has expired. Chrome has labeled this feature as Incognito mode. In Edge, it is called as InPrivate.

The Microsoft browser comes with SmartScreen and Passport technologies that will automatically discard all the phishing attempts from fake websites. Web components are executed in such a way that they’ll never affect your system files and sensitive data. This is called sandboxing technology, and both the browsers include it.

Chrome is one of the most secure browsers in the world. It allows users to activate the “do not track” feature from the settings window. Search engines and other websites will not be able to detect your activity when this module is active.

If the user doesn’t download software from untrusted websites or if he uses Google search to find information, he should not worry about security issues. Google is a smart search engine. It will not show fake and dangerous websites infected with malware in its search result pages. Google will display a malware warning message to the user when an infected site appears in the results.

A good solution for safe browsing would be using a virtual private network service. I’ve tried CyberGhost VPN. Do check its review.

EDGE has been launched for Windows operating system only. But this doesn’t mean that you can’t run it in any other OS environment. If you want to experience Edge on Linux, install Wine application and open the executable file of the browser by navigating to its installation folder. I have not tried this yet, but Wine should be able to run all features of Edge without reporting any errors.

Chrome setup (32 and 64-bit versions) is available for all distros of Linux. You can download it from the official website.

If Edge were not in existence, we would have compared Firefox with Chrome, and our final verdict would have been – Google’s browser is the best. Microsoft is back in the browser’s competition with its smartest and fastest Browser in the form of Edge. It is a few months old application. Microsoft is serious about Edge, and they’ll update their product with some new and exciting features.

Chrome is stable and fast. It will not crash on your system. You can use the free OneTab extension to reduce its RAM usage.