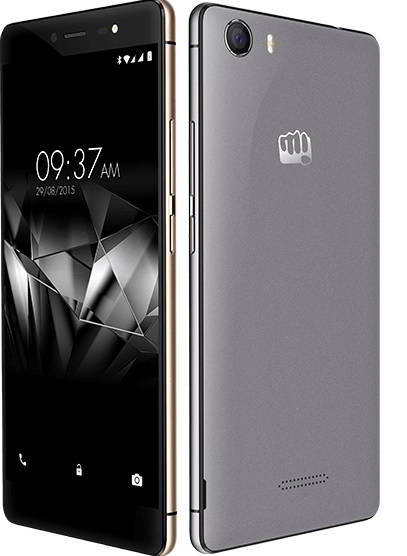 Share
Facebook
Twitter
Google+
Pinterest
WhatsApp
It looks like Micromax is following Intex strategy as the company has started introducing a lot of budget phones all of a sudden. Starting from 1st of October, Micromax has unveiled 6+ Android devices that include Canvas Mega, Amaze, Blaze 4G, Fire 4G, Bolt Q332, Q331, etc.

It seems like the Indian manufacturer is planning to update its Canvas and Bolt line of handsets with latest OS running devices. The mobiles mentioned above were launched after Micromax announced that it will be introducing the most powerful Yutopia phone very soon.

Today, A new Micromax 64 bit smartphone has been launched in India for Rupees 12000. This is the latest flagship model of the canvas series. It is also one of the most powerful mobiles in the canvas range.

Micromax Canvas 5 is a full HD phone with 4G LTE support. It has a 5.5 inches screen with pixel density around 430 and Corning gorilla glass protection.

The phone has MTK6753 octa core processor from chipset manufacturer Mediatek. Micromax claims that this processor is powerful and it will keep the performance of the phone steady when the user edits high-resolution pictures or plays latest Android games.

Canvas 5 features DDR3 3GB system memory and it runs on the Android Lollipop OS platform. It has a full HD powerful 13 MP resolution camera that packs with 5P lens.

The rear camera is accompanied with a special feature called Blue optical filter. Canvas 5 comes with a 5MP camera and a flash system at the front side. It includes the picture in picture mode with which the user will be able to capture good quality photos from the rear as well as the front camera at the same time. It also includes night shot function that will automatically adjust the brightness and contrast of images shot in the night.

Micromax Canvas 5 phone offers high-speed data connections as it supports 4G technology. It has 2900 mAh capacity battery (with 600 minutes of Talktime). This phone boasts metal side frames and microSD expansion slot. Canvas 5 is listed on Micromax website. It is yet to be launched on e-commerce portals.

When Yutopia will hit the markets, Micromax will have 2 powerful flagship phones in the markets. Canvas 5 looks stylish and has the hardware to give cut throat competition to Zenfone 2, Lenovo Vibe P1 and other mobiles within 11000 to 13000 Rs. But it faces the threat from phones like Coolpad Note 3 and Xolo Black 1X that carry similar specs and lower price tags.