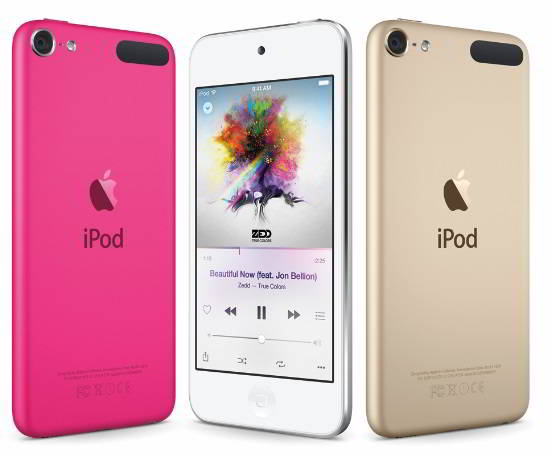 Apple’s latest model of iPod has been unveiled and it’s quite good. The company has not only improved the UI but has also used the hardware that you’ll find on the flagship phone i.e iPhone 6. The new iPod has more storage than its predecessor model. It also houses the latest and most stable Apple OS for mobile platforms.

The clock speed of the iPod is on the lower side but you shouldn’t worry about it. You would be using this device primarily for listening music and taking pictures with the camera. Video mirroring will be faster as the A8 processor handles graphics and wireless connectivity pretty well.

The latest iPod can play 30 frames per second of a full HD 1080p videos. It comes installed with various powerful codecs such as H.264, MJPEG, MPEG4, etc. It has an iSight 8 million pixel camera with BIS sensor and plenty of photography functions that include exposure control, burst mode, autofocus system, etc. There’s a 1.6MP HD facetime camera too.

The iPod touch 6th Generation is enabled with wireless networking technologies such as WiFi and Bluetooth. Hence, file transfer operations will be fast and easy.

If internet connectivity is enabled, you can explore maps too. Unfortunately, there’s no GPS navigation feature available in the iPod 2015. As expected, this device doesn’t support voice calling. It has a retina 4 inches display along with a microphone, FM Radio.

This device lacks some important features like NFC module and you won’t be able to use Apple pay service with it. The payment service should have been included as many people carry their IPods to different places like a shopping mall, bank, hospital, etc.

Even though this device is named as Touch, you won’t find the touch ID feature in it. Apple has installed IOS 8.0 OS on the iPod touch. The company is working on the next generation of this operating system i.e IOS 9. The computing hardware in the iPod is similar to that of the latest iPhone which is compatible with all further releases of the OS. Thus, you can expect the IOS 9 update on your iPod too.

The 6th Generation iPod Touch battery life is within 320 to 480 minutes. You can enjoy music or videos for this duration after charging the battery up to 100%. The playback time is not very good as some handsets below 200 dollars offer better battery backup than the iPod touch 2015. The latest Apple music service is supported well by this new product.

Apple products are expensive but they’re worth the money because the company offers high-quality support as well as excellent features in all of its devices. Many of you (especially the IOS developers) might be wondering whether the iPod 2015 is the cheapest device? the answer to this question is yes. The 2nd cheapest is the iPhone 4S which is priced at Rs 13000 to 13300. In the coming months, this handset might get a further price cut.

When you pay 400 dollars for a device like iPod Touch 2015, you expect some unique and cool features. I think this device offers more than what you can expect a music player to have.

If you want to get rid of music files stored on your phone or PC to free up space, you should buy the IPod Touch 2015 (pricing starts at just 199$). This product from Apple s configured with 16GB to 128GB ROM. The highest storage model will cost you around 399 dollars. You can buy it in silver, green, gold, grey and 3 more color options on the official Apple website.