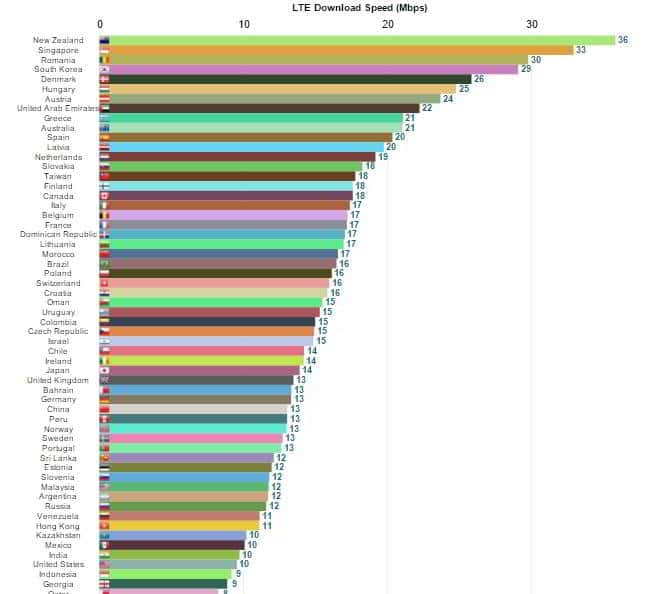 Airtel had launched a series of advertisements in which young women visited different parts of India to test Airtel 4G LTE speed against 3G, EDGE and GPRS connections. The ad claimed that Airtel offers fastest mobile internet connectivity, and if any user manages to prove that his telecom service provider offers better data transfer speed, he’ll get free Airtel connection for entire life i.e., the user will not have to pay mobile bills till he lives.

Being the only LTE service provider in India, Airtel is expected to have faster data connection speeds as 4G technology is the much superior and better than 3g.

Opensignal, an independent organization, tested internet speeds in more than 50 LTE technology enabled countries. Based on the trials, Opensignal published a report on its website. The report listed India at the 54th position.

The story is shocking because it claims that 10 MBPS is the average fastest mobile Internet speed that you can get in the country. 10 MBPS of Airtel is in the same range as HSPDA i.e., 7.2 to 14 MBPS.

According to the report, mobile users in New Zealand enjoy data transfer speeds of up to 36 MBPS. Smaller countries like Oman, SRI Lanka, Romania have better rankings than India. The United States, The largest economy in the world ranks at 55th position.

Hopefully, the report will change next year because a lot of operators are expected to launch their 4G services in the country. Mukesh Ambani-headed Reliance group is also making a telecom debut this year. Telecom wing of Reliance Industries will be known as Jio Infocomm. It will offer LTE services along with 3G, Broadband and voice calling.

Many users can’t afford high-speed broadband connections because the data plans are expensive. Reliance is expected to debut with aggressive and affordable plans that will attract a lot of users. To stay in the competition and retain their subscribers, Airtel, and other operators cut down their expensive tariffs. Visit OpenSignal to go through the full report.