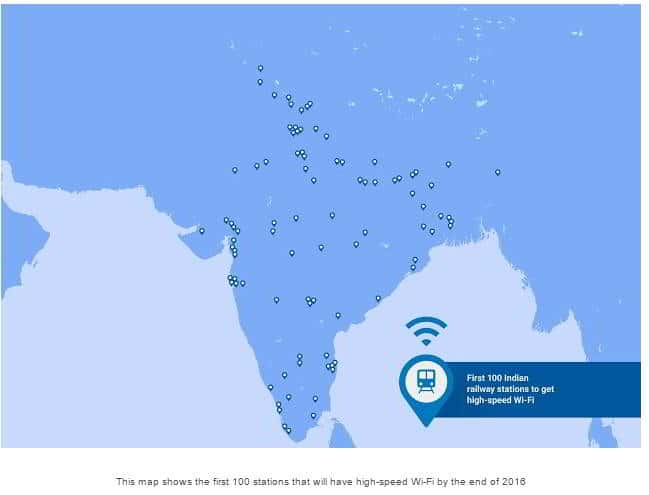 Major tech companies are announcing their strategies to help people in India discover the benefits of the internet. Facebook, has launched Internet.org service in partnership with Reliance Telecom, but a lot of controversies surrounds the project.

Yesterday, Narendra Modi – the PM of India visited Google HQ where Sundar Pichai, the CEO announced his plans to bring a billion people online. Google, in the coming years, will deploy high-speed free WiFi hotspots in 500 busiest and top railway stations in India. The hotspot will allow rail travelers to access The Internet at very high speeds on their mobiles, tablets, and laptops.

This is an excellent initiative by Google as the majority of the Indian population use railways for traveling. As the internet will be free to access (for a limited time) on the stations, people will be able to reluctant to give it a try which in turn will bring 1000s of people online for the 1st time.

Apart from this, Booking tickets will be easier for regular internet users. The railway system is being modernized, and people can easily book tickets if they have access to the web. Unfortunately, you should subscribe to a 3G or 2G plan to access IRCTC portal or to use the app on the station. Google’s high-speed free wifi hotspot project will make things a lot easier for the people as booking tickets online will be much faster.

After loon, this is the 2nd major project of the company.

Contents hide
1 Is it better than Internet.org initiative?
2 Related Posts:

Is it better than Internet.org initiative?

Yes! As the free WiFi hotspot will be available for all the people who use a mobile device or computer, everyone will be able to access The Internet. Unlike FB’s Internet.org, you don’t have to buy a SIM card of a particular telecom operator, and you will not have access to just 250 web-services. With Google WiFi, you will have access to every website that you know.

Along with Google and Facebook, Software Giant Microsoft is planning to offer broadband connection in its way. Microsoft will be using unused television spectrum (using white space technology) to bring The Internet to half a million villages of India. The project was announced last year, and now it is ready to go live. Microsoft has chosen Varanasi to test the technology.