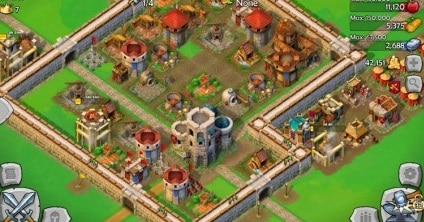 Age of Empires is addictive and one of the most played strategy game ever. Microsoft’s Ensemble Studios have developed it. In AOE, users must create, train and control the movements of various types of warriors. Users are given an option to build their weapons and characters to accomplish the game objectives.

Players have to construct their virtual city or a village from square one. This may seem to be an easy task, but it isn’t. You’ll have to make your workers collect gold, stones and food. Fighters from other civilizations will continuously attack buildings and characters created by you.

You’ll have to protect your belongings with the army units. Just like many other strategy games, AOE comes with three levels of difficulty. It features several exciting missions to accomplish. It can be played in multiplayer mode too. Ever-since launched, Microsoft has launched many versions of AOE till date.

The desktop version of AOE can be installed and run only on Windows XP, 8.1, 8, Vista and 7 and MAC OS powered desktops and laptops. You’ll need to buy a license key for the game before you start playing it on your PC.

For phone and tablet users, there’s good news. Microsoft has launched a free to download version of AOE for mobile devices (here’s the Installation link). The company has named this edition of Age of Empires as Castle Siege.

As of now, this game is available only for Windows Phone 8.1 and the earlier versions of this OS. Age of Empires: Castle Siege allows users to upgrade their weapons and skills of their characters with in-app purchases. It requires just 170 megabytes of storage space. It includes six types of civilizations. AOE: CS will compete with Castle Clash – the most popular Android and IOS strategy game.