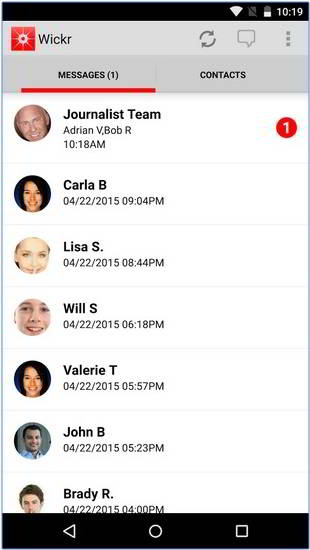 Snapchat has changed the way we communicate with others. Before this app was introduced for mobile devices, people used social networking websites like Facebook, Orkut or Google Plus to stay in touch with friends and relatives. Now, they have started using this picture messaging app for the same.

WhatsApp, the subsidiary of Facebook has 800MN active monthly users, and it is the best IM app in the world. The Userbase of the Snapchat app is growing at a very fast rate, and it is giving other popular Instant Messengers a run for their money.

Many young people have stopped using FB because they are now addicted to Snapchat. This photo messaging service is now worth billions of dollars, thanks to the 500+ million dollar investment from Venture Capitalists and investment firms.

This app is very popular among teenagers and people aged below 30. It is deployed on Google app engine platform. Thus, it is reliable and fast.

Snapchat is a popular picture messaging service because of its unique feature. It is different from image hosting sites. When you send a picture message to any user, the image will be removed from Snapchat servers and the storage memory of user’s phone within a few minutes.

When this app is active on your handset, Snapchat will block the screenshot module of Android or iPhone. Thus, your images will be safe. This IM service has been recently updated with two unique features called travel mode and sticker picker.

When the 1st feature is active, SnapChat will not download media content automatically. The 2nd feature allows users to add stickers anywhere on their pictures.

If SnapChat has disabled your account or username, switch to the below top alternatives of this app.

This app is well known as a top-secret messenger and because of its ability to delete images and messages automatically from both devices (sender and receiver), Wickr is one of the best Snapchat alternatives.

Wickr users are given an option to set a custom expiration time for anything they want to share with others. This application is free from all types of advertisements.

As every bit of data sent/received via this service is encrypted, it is difficult for a person or hacker to eavesdrop on your conversations. Wickr might not be as popular as Snapchat, but it is worth to be tried out.

The team behind this app have excellent knowledge of computer and network security. Thus, you can trust Wickr and its features. You can run this Snapchat alternative on iPhone with IOS 7.0 and handsets or voice calling tablets running the Android operating systems (Ice cream sandwich 4.0 and higher).

Facebook had introduced slingshot app immediately after its attempt to buy Snapchat had failed. Every photo displayed in the interface of this app will be deleted automatically after 24 hours.

You have to swipe images to remove them manually. Slingshot has image filters. It has a pen and text tool, with which users can write on their pictures. It allows you to follow people.

Unlike Snapchat, this messaging service allows you to explore images shared by other users. If people find your photo interesting, they’ll reply with a picture or short video. To use the slingshot, you must have a Facebook account.

The developers of this free Snapchat alternative have claimed that the messages shared with their app are encrypted with RSA and AES (128 bit) algorithms. Cyber Dust allows you to send ephemeral pictures and messages to your friends.

This application supports smileys and stickers. The communication in this app is not only secure but it also safe.

The Snapchat alternative does not generate log files and its servers will never store your messages or photos. It will read your phone contacts to connect you quickly with friends and other people you know.

Conclusion: The above three apps support self-destructing messages, and they’re as good as Snapchat. They support secure instant messaging. Thus, your privacy will not be at stake.