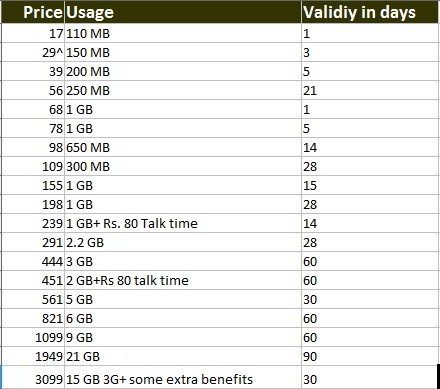 Planning to activate a super-fast internet connection on your tablet or smartphone? Altough 4G network is available in almost all cities of India, millions of people are still using a 3G mobile device.

What is average download speed over a 3G network?

Unfortunately, Aircel doesn’t offer 3G network services in every city of India. If Aircel is providing service in your area, you can recharge with one of the following plans:


Visit Aircel website to get the latest tariff details.

BSNL is a reliable company owned and operated by the Government of India. Its 3G plans are considered among the best in the industry. Last year, BSNL announced several new plans for its customers to stay in competition with big players like Vodafone, Airtel, etc. The company is in process of rolling out 4G service. If you have a 3G phone and  BSNL sim card, you can enable one of the following 3G plans on your device:

Two of biggest telecom firms, Vodafone and Idea will be joining forces to take on RJIO and other top 4G service providers. Idea 3G plans are great for non-4G mobile phone users. Idea has launched 10 to 20 plans for each circle. The plans vary from circle to circle. Please see the latest Idea 3g tariff on the company’s official website.

The 3G plans from the largest telecom service provider in the country are satisfactory. Like other companies, Airtel has introduced several plans. Plans and tariffs are different across the circles.

To give you an idea of what Airtel 3G tariff is like, we’ve shared the latest 3g plans for GJ circle.

in 2015, Reliance had shut down CDMA service in India. CDMA customers were transferred to the superfast 3G and 4G networks. 2016 was a bad year for RCOM. Rcom sold its assets to JIO in December.

RCOM has not shut down its 2G and 3G service yet. The company introduced over 500 3G packs. The tariffs are different for each state/circle. The following 3G plans are available in the Gujarat circle.

This operator has classified its internet plans (3G) into two types:

Vodafone offers excellent customer service. It has launched the My Vodafone app, with which you can get details on your current data packs, phone balance, etc.

Vodafone 4G tariffs are similar to its 3G plans. In unlimited 3G plans from this telecom operator, the connection speed will drop to 56kbps post FUP limit. Vodafone offers more than 10+ plans for each its circle. It is not possible to cover the data tariffs for each circle here. Please visit the official Vodafone website to see latest plans for your circle.

Conclusion: If you find the plans covered in this article costly, start using a broadband connection. Go through my review of Tikona and GTPL broadband to get a glimpse of what Indian broadband service is like.

Please confirm the plans from the local shop or customer care executive of the respected operator before you activate it by dialing these USSD codes.