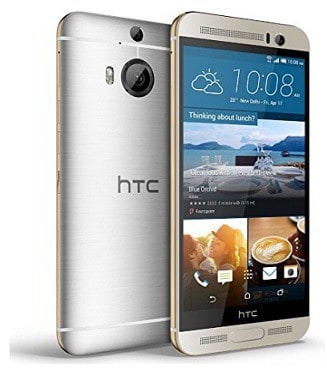 Although Taiwanese multinational company HTC has launched several smartphones in India, the firm has been struggling for 2 to 3 years. There are 2 major reasons for the same, dominance of Chinese firms Xiaomi/Lenovo and price. HTC mobiles priced within  20000 to 25000 Rs carry the same hardware as the latest Xiaomi or Lenovo phones under 15000 Rs.

HTC has launched a plethora of mobiles in India. If you ignore the phones with bad customer reviews, you’ll get only a handful of top-rated HTC phones. Today, we’ve shared the best HTC phones under 20000, 25000, 15000, 10000 Rs in India. Our list covers the dual-SIM or single-SIM Android OS running HTC phones with nice features i.e. 4G or 3G, good cameras, up to 3GB RAM.

Note: Mobiles are arranged as per their specifications. Unfortunately, HTC hasn’t launched too many phones under 10000 Rs. Hence, don’t be surprised if you find some old devices on this list.

One of the top-selling and most popular HTC phone in India, Desire 616 provides the below features:

This budget smartphone packs a 1024 megabyte RAM (1 GB). It has an 8 GB ROM alongside Android 4.4.2 Kit Kat operating system. It ships with the following configuration:

Desire 630 is based on the micro splash design. Hence, it looks unique. HTC has built this handset with a polycarbonate material. Thus, the Desire 630 is a sturdy phone. This mobile provides 13 MP rear and 5 MP front-facing cameras. It offers an especially designed photo editing Android app and 2 SIM card slots.

Desire 728 is a lightweight device and one of the latest phones from HTC. It packs a 64 bit 1299 MHz MediaTek 8 core processor, 2 SIM slots and the below features:

Desire 826 is a dream phone for HTC fans. It has an octa-core Qualcomm Snapdragon 615 processor that has been configured to tick at 1.0 GHz/second. Desire 826 includes a pair of full HD cameras, each equipped with either 13 million or ultra pixel sensor. Desire 826 has a powerful Adreno 405 image processor and a full HD screen of 5.5 inches size.

One of the latest mobile from HTC with excellent hardware configuration, HTC Desire 828 has 16GB internal storage memory and the below set of features:

X9 is one of the best HTC phones below 20000 Rs in India. This mobile runs on Android Marshmallow operating system. It has a 2.2 GHz octa-core MediaTek Helio series processor.

816G is one of the newest HTC phones launched in India. 816G comes with a 5.5 inch 720 pixel IPS touchscreen display. It is 7.9 mm thin. The handset features 2600 mAh lithium polymer battery. It carries proximity, compass, light and accelerometer sensors. HTC 816G features a full high definition 13.0 MP BSI sensor at the back.

Desire 10 Pro is a 4G RAM installed HTC Phone with a mammoth 64GB storage memory. The handset provides a killer design and it runs on Android 6 operating system. HTC Desire 10 has an octa-core 1800 megahertz processor and an LCD 5.5-inch full HD display.

The phone carries a MicroSD card slot, Hybrid SIM card slot, and it includes a 20 megapixels rear camera. It packs a 16 megapixels secondary camera. The HTC phone enables you to record video clips at 30 FPS. It features HTC Sense UI and has a pixel density of 387+.

HTC Desire 10 Pro offers up to 19 hours of backup power through its 3000 mAh lithium-polymer battery. It is 7.9 millimeters thin. The handset costs 18000 Rupees.

This HTC phone runs on Android 7.0 OS. It has HTC Sense user interface and the below hardware, software:

One A9 mobile from HTC carries Adreno 405 GPU. It has 32GB internal storage. It features a powerful 13 megapixels rear camera that supports optical image stabilization, autofocus, full HD video recording, etc. The back camera of One A9 handset packs a BSI Sensor.

HTC has enabled its One A9 phone with a high-resolution ultra pixel sensor equipped selfie camera.

The HTC phone under 25000 Rupees provides a MicroSD card slot and has a weight of 144 grams. HTC One A9 comes with 2150 mAh battery and has 3GB RAM. It supports 2 SIM cards, 4G-LTE, VoLTE, and includes a robust fingerprint reader. The phone is powered by the Android Marshmallow operating system.