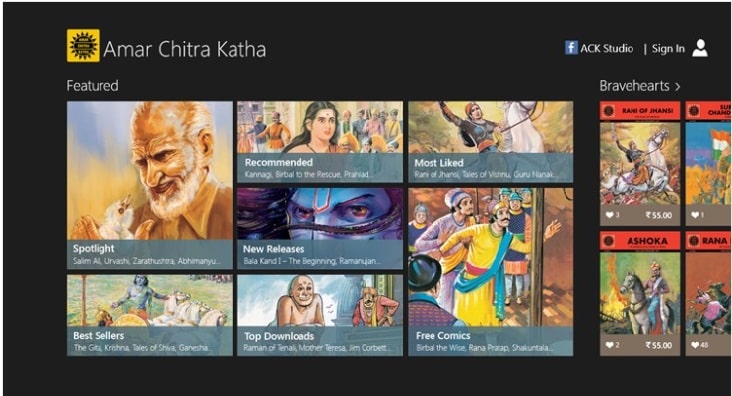 ACK comics for phones has been developed by Nine starts Ap9 studios and is free to download. It comes with five free best-selling comics named Tirupati, Shakuntala, Birbal the Wise, Anant Pai and Tenzing Norgay. This app has inbuilt features that will allow its users to explore the most popular titles of top ACK comics to Windows phone operating system users. These comics would be easy to read and download.

At the official launch event of the free ACK App, Director Mr. Durani quoted “At Microsoft, we are constantly looking for ways to boost the apps offering and make it more relevant to the consumer. This is yet another step in that direction. ACK comics are an Indian childhood staple, and we are sure customers will be delighted with the addition of this app to their tablets and notebooks.”

Mr. Manas, Chief operating officer of ACK Media, said “We are very excited about the launch of ACK Comics, Amar Chitra Katha’s first digital comic store app in association with Microsoft. We have always been pioneering new avenues and media channels to tell our stories. Digitalization of Amar Chitra Katha was the next step towards making our comics available to the net savvy Gen Z.

With the launch of the ACK Comics App, we can now reach out to millions of readers who can access the vast treasure of Indian storytelling at their fingertips. Every title has been painstakingly renewed to provide a superb digital reading experience. Our ACK fans have always supported us, and we look forward to a warm response from our customers for this app as well.”