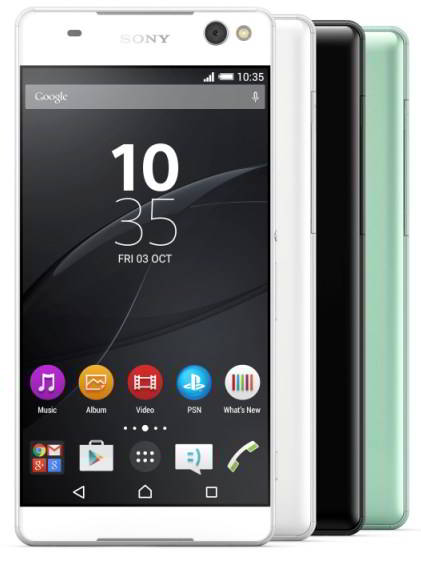 The mobile division of Sony Corporation has today unveiled 2 new mid-range 4G enabled handsets. The phones are a part of Sony’s Xperia series and they’ve high-resolution Exmor sensors. The 1st handset to be unveiled was the C5 Ultra and the 2nd one was Xperia M5.

The C5 Ultra has a 1080p LCD screen that measures 6 inches and it is backed up by a newer generation of Sony Bravia 2 Engine. This phone has a specially designed selfie flash system that works along with a 13.0 megapixels front camera for capturing the perfect self-portrait images. A camera with a similar sensor is placed at the back.

Both primary and secondary cameras feature wide-angle 22 millimeters lens. They support advanced picture recognition system that automatically adjusts tone, color, and brightness of the object that you want to capture.

Sony C5 Ultra has a stylish design along with an aluminum frame. It includes an octa-core 1700 megahertz Mediatek processor of 64 bits computing architecture. The CPU is coupled with a 2930 mAh battery and 2GB RAM.

This Sony phone has a weight below 190 grams. It is 8.199 MM thick. It will hit the markets in 3 color options, mint, white and black. On its official blog, Sony has claimed that C5 ultra has a battery life around 48 hours. The company has also mentioned that the phone will be able to play videos of up to 1920 x 1080 pixel resolution for 450 minutes.

Sony Xperia M5 is yet another full high definition midrange smartphone with good camera features. It packs with the same Bravia mobile engine for rendering high-quality images and creating/displaying videos on the screen. According to Sony, the M5 is a waterproof phone that can be washed with tap water. Its design is so perfect that even smallest dust particle won’t be able to enter the body of this phone.

As you can see above, the M5 and C5 ultra are handsets with good specs. Their pricing and availability details will be unveiled by the company soon. C5 Ultra and Xperia M might be the best Sony phones even if they are priced at 28000 Rs.

Xiaomi Mi 4i with Android L, powerful processor for 13000 Rs