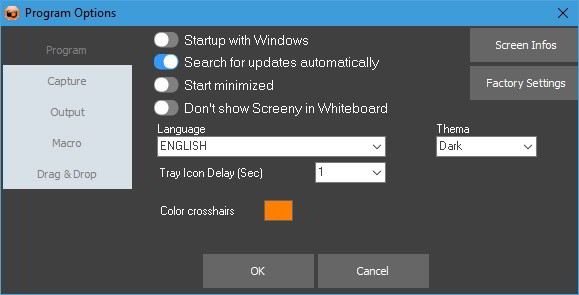 The Windows operating system provides a snipping tool that allows users to take a screenshot of a selected area on the desktop. Although the tool does its job well, it comes with several limitations. It doesn’t support annotation. Furthermore, users must use a third-party program to edit the screenshot and make it look more informational. The MS Paint program is easy to use but you’ll have to spend some time to learn its advanced features.

If you’re a professional, instead of wasting time in learning Microsoft Paint software, you should consider using Screeny – a free screenshot software for Windows OS.

Screeny is a free program for Windows XP and later OS which you can use for the following two purposes:

Before the users begin using Screeny on their Windows PC, the program asks them to select a preferred language, color theme, a trigger key, and an output directory where it will save the screenshots.

The application supports light and dark color theme. The key, when pressed, will make the Screeny application to capture the screenshot.

The main interface of the Screen program enables boasts the following options:

Screeny comes with a picture editor module through which you can make changes to the captured screenshot.

The screenshot editor is similar to MS Paint. It provides basic but essential features which you can use to annotate the image.

Apart from allowing you to capture the desktop screenshots, Screeny lets you record a video of the desktop.

To turn on the screen recording feature, click on the video button which appears at the left side of the main Window.

The tool saves the recorded videos in AVI format. You cannot change the default file format to MKV, BOB, or MP4.

Screeny provides plenty of options when you use it as a screen recording tool. The program lets you:

By default, the program is configured to record or capture a rectangular area on the screen. Screeny lets you change this to freehand, circular square, etc.

The recordings are saved automatically to the folder you’ve specified. You can open this folder from the main interface of the program. Screeny supports FTP. Hence, it can save the recordings to a remote computer if you know its IP, port, and the password.

The Screeny tool comes with a Whiteboard module which turns your computer screen into a digital whiteboard where you can draw or highlight certain objects with an arrow, rectangle, square, circle, etc.

The program allows you to automate screen recording tasks with macros and lets you customize the effects.

Users can configure Screeny for Window to run as a service on startup. It provides an option to reset the factory or default settings of the program.

Conclusion: Screeny is a powerful free screenshot software for Windows which doubles up as a robust screen recording tool. It is a freeware which you can download from the kaemsoft.de portal.