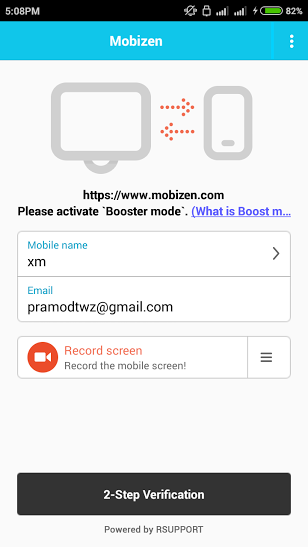 Screen recorder applications for Android are useful as they allow you to create videos with the content displayed on the screen of your mobile device. The videos can be of any format, resolution, frame rate and you can easily share them with others on YouTube, Daily Motion or any other website of your choice. If you’re a gamer, you can record your gameplay in a clip with a screen recorder.

If you want to share a useful smartphone tutorial, the screen recorder application can be of great use to you. The screen recording apps are useful for Android developers too as they can easily create a promo video of their app with it.

This app doesn’t require a rooted Android phone and it comes with just two limitations. The frame rate is limited to 8, and a logo will be displayed on the screen when content is being recorded. This application can be installed on all devices running the Android OS launched after 2013. Free Screen recorder supports audio. It can even track user’s touch gesture when they’re capturing a video.

Install from the play store.

This is yet another free screen recorder for Android that works great without root access. AZ creates watermark free videos in 1280 x 720 or 1920 x 1080 pixel resolution. Like the above app, AZ uses a microphone on your phone or tablet to record audio. It has a floating interface that will remain on the top of the content or a scene you want to capture.

This app allows users to change the bit rate, saving location, orientation, resolution of the videos. AZ screen recorder has some advanced and useful tools. To name a few, the app offers a count-down timer, video trimmer, magic button and overlay front camera.

The Android Lollipop operating system has many improvements over KitKat 4.4. It includes many new powerful APIs that allows developers to create apps that would usually require root access permissions on Android 4.4 or 4.3 OS. The Lollipop screen recorder is based on one such API.

This app stores your videos in a folder that can be easily accessed with the gallery app of your device. Thus, you can find and modify your clips easily with a third party editor tool. This app works only on Android 5.0+ tablets and phones. It supports HD resolution. It is free. [download link]

You can use this app without root access on phones running on Lollipop OS (Android 5.0 or higher version). SR supports unlimited recording. It has a material design that makes UI simple and elegant. This app supports delayed recording. It will add watermark to every video you capture. Its free version does not record audio, and this is the major drawback of this app.

When it is active, you cannot minimize this screen recorder. SR supports shake to record feature. If you want to enjoy better features, you must upgrade to the premium version of the app. The pro version is priced below 3 dollars, and it supports features like custom banners, sound-recording, and some more useful features. [install]

The developer claims that Mobizen is the most powerful screen mirroring and recording app ever. If you want to try out, install this app from the play store and open it.

Tap on the start button to accept user license agreement. Mobizen will now request its user to create a new account. When your account has been set up, this app will display a small tutorial that makes you aware of its top features.

You can start the screen recording utility of Mobizen only after you enable the developer mode and USB debugging on your phone. You’ll also be prompted to install the phone’s USB driver on your PC. Recorded clips will be saved to a library created/maintained by mobile.

You can share the recorded clips online as there’s a utility for sharing the videos. Mobizen supports recording of 720, 480, 360 and 240 pixels resolution at 5 to 30 FPS. It can record audio as well as touch gestures of the user. This app is good, but it can give a headache to the user because of a large number of features it offers.

Install Mobizen on your tablet or phone.

The top 5 best apps we’ve shared above support various Android platforms like KitKat, Lollipop, Jelly Bean and the upcoming Android Marshmallow. Most of the above screen recorders will add watermark to your videos, and they’ll require root access. Some of them do not require special permissions.

My Vodafone app will not be charged for using 2G or...