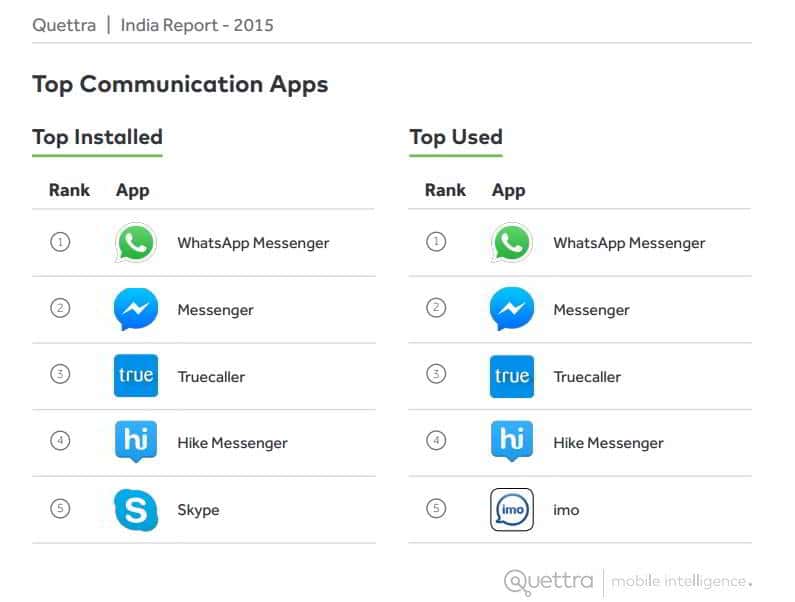 Quettra, a mobile intelligence firm has been publishing app usage statistics on a quarterly and yearly basis. One of its latest reports has revealed the most used apps in India. The report was published by Quettra after detailed analysis of top applications in various categories of Itunes and Google Play Store. Below paragraphs include details on the same.

E-commerce category: Online shopping has become one of the biggest crazes in India after Social networking. Quettra report claims that Flipkart app has a larger user base than that of Amazon, Snapdeal, and Shopclues. Amazon is steadily gaining momentum on the web as well as on mobile devices. In October 2015, the traffic to this shopping portal had skyrocketed to 200 million users, which is much higher than that of Flipkart and Snapdeal.

Transportation category: When it comes to ride-sharing and taxi apps, Ola cabs is growing very fast and it seems to be unstoppable at the moment. Despite its growing popularity, Ola cab’s daily active user base is declining. Uber is catching up with them quickly.

Browsing: According to Quettra report, UC browser has 11.2 million users, which is around 2 times higher than that of Chrome. Opera Mini is still the favorite browser for a few million Indian citizens.

Recharge: PayTM has an impressive mobile recharge market share of around 30 percent. The growth of IReff is stable and Freecharge is on the rise. It has 17% share. Paytm has managed to keep increasing the count of its users every month.

Sports: Cricket is the most followed sports in India and there are lots of apps for getting latest scorecards and match details. Crickbuzz is ruling over applications in this category.

Fun: Arcade and strategy games are very popular in the country. Talking Tomcat is the most played game followed by Clash of clans and Angry Birds Rio edition.

Self Entertainment: Saavn is most downloaded and used Indian music app. Times Group’s The Gaana app is in 2nd position and Airtel Wynk is the 3rd in the list.

Communications: WhatsApp is the most popular messenger. FB, TrueCaller, and Hike are ranked 2, 3 and 4 respectively.

You can go through the full report on most popular apps in India on Quettra’s official website.