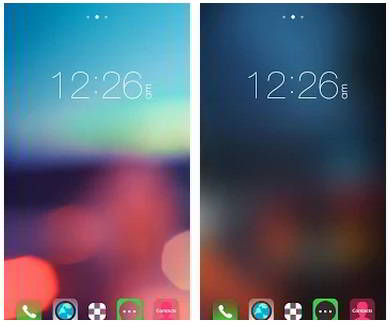 Launcher app is one of the best features of Android OS because it allows you to customize the look and feel of your tablet or phone. You can easily manage or change themes, wallpapers, widgets, icons, and animations with this application. The best and top rated launcher apps for Android are Go Ex/Z, Nova, Cheetah Mobile, Apus, and Hola.

Go launcher Z has 100 million users and 5 million ratings. It offers a number of customization options. It is a perfect personalization app for Android. When you set Go Launcher as the default system launcher, you’ll find a beautiful clock widget, perfect size icons and many new utilities like app lock, memory booster, app manager in your Android device.

Like its alternative & competitor launchers, the Go launcher removes the app clutter from the home screen. To access your games and apps, tap on the 4 square icon that appears on the home screen of your Android device.

Go Launcher for Android allows you to sort apps by name, date of installation, etc. Apus, CM Launcher, and Hola lack this feature (their next release might include it).

Go Launcher Z features a wallpaper filter. If you want to change the contrast, brightness of the current wallpaper and if you want to add some cool effects to it, use this utility.

Recently, the app got updated with new features. The graphics files in the latest version of Go launcher Z has been optimized. Hence, the performance of this app is much faster than it was earlier.

To make your Android device’s home screen look even more stunning, download and install the below free Go launcher themes on your handset or tablet. (Scroll down for Nova launcher themes)

Nova launcher is not as popular as the above app but its latest edition v4.0 has many new features that make it more exciting than it used to be. Its new UI is based on material design. This gives a refreshing look to your favorite Android launcher.

The developer, TeslaCoil software has added more animations and better icons to this app. It has also updated the official Nova store with stunning wallpapers and themes. Nova also includes an improved and faster search widget. It allows you to edit app name and change the icon layout.

The latest version of Nova supports Android Lollipop OS too. It features a backup and restoration tool with which, you can save the layout and other settings to a file. If you want to download Nova launcher, make sure that your handset/tablet has Android 4.1+ OS.

The installation process for a launcher theme is same as that for an Android app. Open any of the above Google play store links and click on the install button. The theme will be installed as an application. If you’re not able to install it, contact me or drop a comment and don’t forget to mention the problem you’re facing.