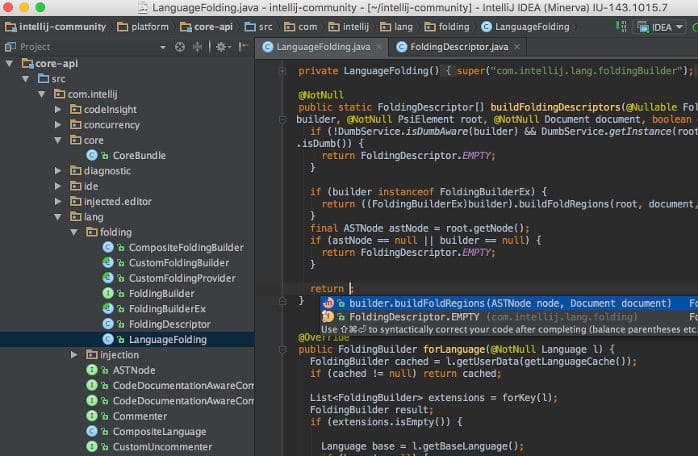 Java is the world’s most popular object-oriented programming language. It allows users to create powerful desktop, web, and mobile phone applications. If you’re a programmer, you must use an IDE so as to improve the productivity and manage projects and its related packages with ease.

IDEs provide an option to compile and run programs on the fly. If you’re developing a web application powered by JSP, JSF or Servlets, an IDE can save your time as it provides a wizard tool to create a web server instance, configure ports, database drivers, etc.

The Java IDE provide auto-complete feature and they highlight variables with various colors. The IDEs allow you to indent untidy code with a shortcut key or single click of the button. They enable you to build robust desktop or mobile applications by dragging and dropping windows, buttons, toolbars, tabs, tables, etc. Below is the list of best IDE for Java development on Mac, Linux or Windows computer.

Eclipse is the world’s most popular open source IDE for developing Java applications. The IDE is powered by the Java programming language. 1000s of small and large IT firms are using Eclipse since 2011.

Eclipse runs on Linux, Mac, and Windows operating systems. It has a terminal module through which you can fire various java commands or see the error and warnings thrown by the application.

Eclipse comes with a smart spelling checker tool. It enables you to create database-driven programs.

Eclipse has a beautiful interface and it supports plugins. It is faster than most Java IDEs that you’ll find on the web. Apart from Java, Eclipse supports various programming languages.

Netbeans is a powerful IDE which you can use to develop all types of Java applications. The IDE offers GlassFish server that enables you to run and test web apps. It allows you to import projects developed with another IDE.

Like Netbeans, Eclipse lets users install and use extensions. It gives you access to plugins that convert code written in one programming language to another.

Netbeans comes with Issue tracker function. It allows you to change the default position of buttons on the toolbar. Netbeans has a user-friendly interface. It lets you clone or set up a GitHub repository. Netbeans provides a powerful profiler tool that helps users in developing processor and RAM friendly programs.

Netbeans is available for download in multiple flavors. If you’re a beginner, you should download Netbeans JAVA SE bundle. Other users must install the JAVA EE bundle.

Also see: Best job sites in India and their apps

IntelliJ is a widely used Java IDE that provides several features. It is ideal for the web, mobile, and enterprise application development.

IntelliJ Idea comes with version control tools. It allows you to make bulk changes to code with a special function called code refactoring.

When the user is developing an application, IntelliJ caches the classes and configuration files to make sure that the IDE opens the files quickly in the editor interface. It also fastens the code compilation and execution tasks.

The IDE enables you to define shortcut keys. It supports plugins. For easier navigation, IntelliJ displays breadcrumbs above the editor. The IDE comes with different color themes.

BlueJ is a cross-platform Java IDE with a large user base. It is used by teaching staff and students in universities because of its simple interface and easy to understand features.

Unlike other IDEs, BlueJ highlights the scope/context of the program. It enables you to inspect program objects when the program is running.

The BlueJ IDE displays how classes are linked to each other by generating a class diagram. It is a lightweight program that takes 100 megabytes storage memory.

DrJava is yet another lightweight IDE for writing programs in Java. It has over 3 million users and an excellent interface. The options to open, create, close files are available in the program’s toolbar.

The toolbar also includes buttons to compile project and cut, copy, paste the code. The program can highlight the line that has thrown a warning or error. It enables you to set breakpoints and perform JUnit tests. It has a function to find and replace code.

DrJava doesn’t have complicated features that you’ll find in Eclipse, IntelliJ, and Netbeans. Hence, it is ideal for students trying to learn Java programming.

DrJava is an open-source IDE written in Java.

Conclusion: Java is a powerful programming language which is being heavily used in IT companies. It powers several popular enterprise programs.

If you want to become a Java developer, use one of the IDEs we’ve shared above. The IDES can explain the predefined java functions, objects, classes, etc. It can also autocomplete the code for you.

Advanced users must use IDEs for developing and debugging programs quickly. Beginners should first learn to configure environment variables, classpaths, and compile/execute java programs with Linux terminal or command prompt before switching to an IDE.