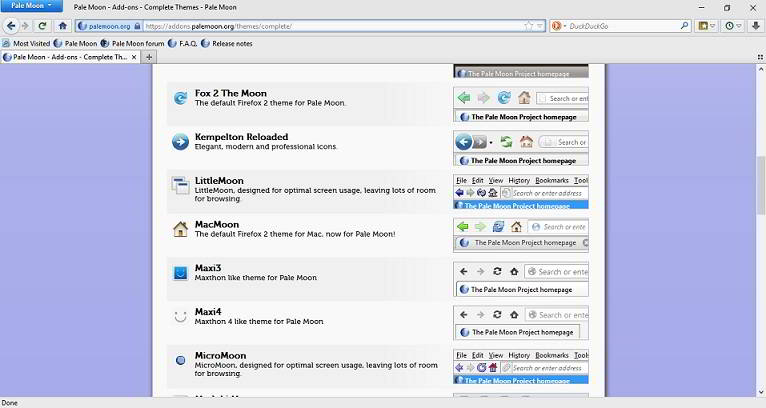 Pale Moon, the browser developed with the Mozilla Firefox Framework has now been updated to version 26.0. The update was expected as HTML 5, CSS3 and HTTP 2.0 technologies are being adopted at a very fast pace. Last major update for Pale Moon was released in 2014. The Beta version was launched for testing in December 2015.

Pale Moon’s core processes have been optimized and redesigned to support all types of latest processors from AMD and Intel. It also includes a new rendering engine called Goanna. The browsing history button has been added to the right of bookmarks option.

The Firefox browser is updated every month, and the Pale Moon is based on its latest versions. Firefox is one of the most secure browsers in the world. As PM is based on FF, you can use it without worrying about your online privacy and security.

If you complained of frequent browser crashes in Pale Moon, you should now be happy as this issue has been resolved. Thus, you can surf any of your favorite websites built with the latest web frameworks and scripting languages.

Pale Moon has UI similar to that of its parent browser i.e. Firefox. It has DuckDuckGo as the default search engine. Its latest edition (i.e. 26.0) comes with the support for simple as well as complex themes.

The themes are available for download as add-ons on the official website of the developer. There are more than 25 skins to choose from.

You can now import your profiles from Firefox to this browser with the new and powerful free migration tool.

Pale Moon can be installed on systems with minimum 512 megabytes RAM, 150 MB storage memory, and Windows 7 OS. You can install and use your favorite Firefox plugins in it.

Linux version of this browser is available as well and it has similar requirements as the Windows version. A portable version is available for users who plan to use the same software on different Windows computers.

I used this Pale Moon browser for a while. Each time I tried to open a website, PM displayed connection is not trusted error. Popular websites like Facebook, Gmail failed to open.

Mozilla has launched Firefox 44. The new version of the software comes with an important feature that many users will like. The browser supports push notification. Chrome was one of the 1st desktop browsers to include this feature, but now it is not the only one to have it. Users of Firefox 44 will be able to get updates from their favorite websites on the browser’s interface.