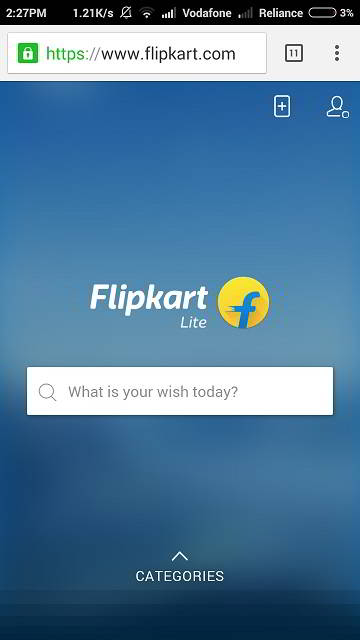 It seems like the management team at Flipkart is in 2 states of mind. Early this year, the company had decided to kill their mobile website and go app only on handheld devices in an attempt to get permanent customers. After 10 months, they have reintroduced the mobile version of the website.

This move is strange because in April one of the top executives at Flipkart said in an interview to Times of India that the desktop version of the website will shut down within a year or two.

It looks likeFlipkartt had lost a lot of search engine visitors because of their strategy. Shopping through mobile applications is not a very pleasant experience for the user. People do a lot of research before they buy online. They use search engines i.e Google, Bing to find details, reviews of the product and this was not possible with the Flipkart app.

To be honest, not everyone would install apps on the advice of a website. Forcing users to do so will create only hatred towards the company which in turn makes people for switching to other services.

As of now, Flipkart lite version is accessible only on the JavaScript enabled Google Chrome browser. The new site is pretty fast, and it is easy to use. The layout is good. It boasts a search field in the center. Categories have been positioned to the bottom. The user will have to drag the top arrow sign in the upwards direction to access Flipkart categories.

This site supports Chrome notifications. Now users don’t have to download any app to shop online. The new Flipkart mobile website features an install module that allows users to add the web app to their phone’s home screen.

Contents hide
1 Why has the mobile website been relaunched?
2 Related Posts:

Semrush shows that Flipkart’s organic traffic was down 2 percent last year. Snapdeal and Amazon are having more than 10 million search impressions (or unique visitors) whereas Flipkart has around 6 MN.

The e-commerce portal might have lost traffic because Google was not able to find the mobile version of the site. When the user tried to open zxczcxcx.com on his handset, he would see a message to install the app.

Google ranks responsive and mobile-friendly portals well in the search results. As Flipkart didn’t support handheld devices, Google might have lowered its ranking. In other words, the site may have suffered a penalty.

Flipkart had bought Myntra for around 500 MN dollars and the web version of the site was killed soon after that. They had similar plans for their portal. Google seems to have taught Flipkart a good lesson due to which they have decided to give up the app only model.

Best websites like Craigslist to sell your stuff online (2018)