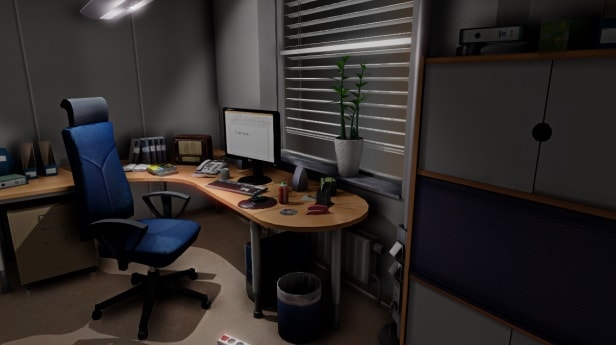 If you love being in paranormal conditions and watching horror shows, then you should play the best free indie horror games we have shared in this article on your Macintosh or Windows computer. The games have disturbing and scary graphics. They test your level of patience like no other software.

The games offer 3D graphics and have great background sound. Although the games don’t require 1+ GB storage memory, they’ll surprise, thrill, and excite you during the gameplay.

The story of this free indie horror game for PC revolves around a graphic designer who is on an overtime duty to get his pending work done. During the wee hours, the office gets spooky and strange things start to happen.

The strange environment freaks out the designer and with heart in his mouth, he decides to find out the reasons for the same. This game has an interesting plot, nice graphics and it will keep you entertained and thrilled.

The game enables you to control the character with W, A, S and D keys of the keyboard and the mouse. Its setup file’s size is 115 megabytes. It runs on Windows and MAC operating systems.

SCP is a popular Indie horror game for Mac and Windows 7, 8 or 8.1 PC. In this game, you’ve to deal with a possessed sculpture that looks strange as well as scary. The sculpture has skills to hunt down anyone that comes in its way. It gets into action only when it’s out of your sight.

This sculpture is accompanied by a deadly creature that can kidnap and control the player. SCP Containment breach has spine-chilling audio effects. The size of the game’s installer file is 230 megabytes.

In this game, you’ve to guide a girl named IB out of the museum where she gets accidentally trapped. Just like the night in the museum movie, the artifacts, and sculptures in the place where IB is trapped come to life after the sunset. This is one of the coolest horror games for girls.

In this FPS, you’ll play the role of a guy trapped in a hospital that has been in no use since years. The hospital is scary and it is a home to many ghosts. As you’re into their zone, the monsters consider you as a trespasser and they’ll try to kill you. You’ve to hunt them down and get the guy out of the hospital.

Yet another FPS in this list, you’re trapped inside a large house which is haunted by spirits and several mysterious things. You’ve to solve the riddles by exploring the manor. The game has many interesting but scary mysteries and nice graphics.

Rec Shutter is one of the top free horror Indie games. In this game, the user plays the character of a reporter carrying latest gadgets. One of the gadgets that the character owns is a shutter equipped camera.

The character must solve the mysteries of the spooky place and at the same time, he must use the camera to record paranormal activities and other scary scenes from a haunted location. On his mission, the character will encounter ghosts and several other scary creatures.

With a similar plot like the popular FPS half life 2, the player has to immerse himself in the character of Simon who wakes up in a spooky city after an accident. He has to find the reason for the relocation. To do so, Simon has to travel across the city where he’ll find clues. He’ll also face paranormal creatures.

The game offers 5+ hours of gameplay. It enables you to arm the character with 24 different weapons.

This free horror game for Apple and Windows PC takes you way back to the year 1966 in a scary incident at a power plant, which was shut down because of some unknown reasons. Some citizens are trapped in this factory and you’re assigned the task to rescue them.

In this game, you’ve to find eight pages that have been written by a scary slender man at his residence located in a deep forest. The place where you’ve to search the article is scary. Slender man is roaming in the forest to find new victims.

Conclusion: The Indie Horror Games we’ve mentioned above have a great storyline. If you want to play free games to kill time, play Slender, One Late Night, Kraven Manor, Erie, Cry of Fear, SCP or IB on your MAC or Windows PC.

Dashlane 4.0 has password history feature, notes templates and much more