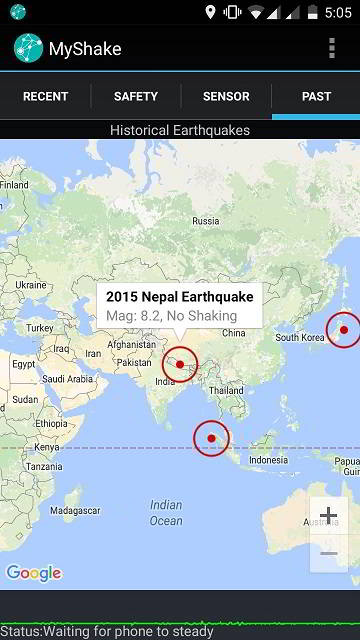 Every country has a meteorological department where a bunch of seismologists works day and night to record the movements of tectonic plates. If they detect some unusual changes, the seismologist will warn people that an earthquake may strike their city.

Now you can be less dependent on the Radio or Television to learn about an Earthquake. The UC Berkley Institute has launched a MyShake app that converts your smartphone into an Earthquake detector.

According to its official page on the Berkley University website, the MyShake app is powered by one of the most advanced computing technologies called neural networks.

The app runs as a background service on the Android phone. It uses a smart algorithm to distinguish between human activities and Earthquakes. Whenever a strange movement is detected, the MyShake Android app will send the recorded data to a central server.

The server will calculate the magnitude. It also confirms if the earthquake has been struck or not. It will update the map to identify other users about the quake.

The app has four sections i.e. recent, safety, sensor and past.

The first section displays a google map of the world. The map is marked with several red dots indicating the major epicenters. It also display’s the current status of the epicenter. The app generates a green color status graph which fluctuates when the phone is moved.

The graph will be produced in real-time. The app will not create it if your mobile device doesn’t have a motion sensor. But you can still use MyShake for getting the earthquake alerts. For the best result, the user must keep the smartphone on a plane surface. The user must also keep the phone’s data connection and the GPS module on.

The sensor section will let you know about the current readings of the X, Y, and Z axis of the accelerometer.

In the safety section, the MyShake app shows a list of useful tips on how to protect yourself and others from being a victim of the earthquake.

The last section will load a map that highlights cities or countries that were struck by massive earthquakes in the past. To get more details of the quake, the user must map on the red circle.

The MyShake app will help scientists at the US Berkley university a lot as they will have data from many smartphone users. MyShake will become a powerful seismic detection and earthquake warning system if a lot of people start using it. Let’s hope that this project turns out to be a successful one.

When an earthquake strikes your city, would you run the app to confirm the earthquake or run for your life?

Whose number is this? Best way to find unknown caller details