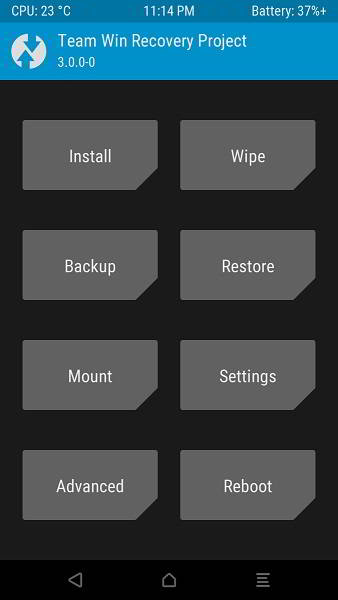 The Team Win Recovery Project, popularly known as TWRP lets you flash all types of ROMs, IMG and ZIP files on Android devices. The stable 2.8.7 version works great on all supported phones and tablets. If you were anxiously waiting for an update to TWRP, then your wait is over.

The TWRP 3.0 has been launched and it boasts a new theme which uses black and cyan colors. The animations and icons in it are attractive.

If you’re using the Marshmallow OS based custom ROM, the latest TWRP 3.0 will not display popups to grant superuser permission.

The AOSP keyboard that works as an input device in TWRP has been updated to version 6.0. The keyboard’s performance is better than it used to be earlier in version 2.8.7 (or lower) of the software.

The terminal in TWRP 3.0 displays arrow keys that make navigation easy. You can go through the terminal output line by line by tapping on the down or up key.

In addition to the new arrow keys, the user will find a Tab, Esc, and Ctrl button too. Thus, you can easily stop an executing process, copy the terminal output, etc.

The latest team win recovery project supports language translation. Languages that require small font files will be supported. Translation from English to a complex language like Japanese will be difficult.

The Team Win Recovery Project 3.0 can now read and write data to the Android adopted storage (a feature found in the Android 6.0 Marshmallow OS).

The new version of TWRP has been released after a long time. There are a lot of changes due to which the Recovery manager may not function on some devices. If the new software doesn’t work on your device, you should roll back to its earlier stable version (2.8.7.0).

To flash the latest IMG of the recovery manager on your tablet or smartphone, you should use the TWRP manager or RASHR app.

Both the above applications require root permission as it will be modifying or installing system files. The TWRP manager allows you to flash system specific image from its interface. Below is a small tutorial that explains the same:

After you install and run this app, select the device name.

Now tap on recovery version to install option and select the IMG version. When the main window appears, tap on install recovery button. The app will download and install the TWRP image file on your Android device.