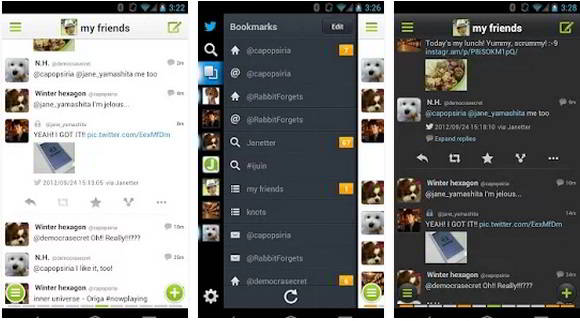 Twitter is one of the largest social networks. It was launched as an alternative to short messaging service i.e., SMS. With Twitter, you can follow accounts of famous celebrities, politicians, business person and your favorite sportsperson. Some high profile people having twitter accounts are Barack Obama, Narendra Modi, Katy Perry, etc.

The most important feature of Twitter is hashtags. Hashtags allow users to stay in touch with their favorite topics. For example, if someone posts an update on the latest smartphone and if he adds a hashtag to it, other users with similar interests will discover your tweet when he clicks on the same hashtag created by some other user.

You might be aware of the fact that Twitter has been continuously rolling out updates for its official app for mobile devices. But this has not stopped third-party developers from launching their version of Twitter for Android or iPhone.

There are several thousand users who prefer downloading third-party apps over the official Twitter app. Thus, to increase its smartphone and tablet user base, Twitter has been blocking API access to the apps that have more than a million users.

The company has been doing this for past 2 or 3 years. In case you’re not able to create an account on your favorite Twitter app, get rid of it and download any of the below free apps:

This app supports infinite scrolling feature. It has a static navigation bar at the top. This bar has tools to view direct messages, notifications or to add friends or person search operation of Twitter.

The home screen of this app will be populated with latest tweets automatically. You are allowed to refresh the feeds manually. The tweet composer has been fixed at the bottom of the main window of the Twitter app.

Unpublished tweets will be automatically saved as a draft. Writer utility allows users to share their location, image or videos with your followers on Twitter.

This app allows you to use multiple Twitter accounts at the same time. Users can change the font size. They are allowed to disable or enable sound effects, quick read more, image previews. This Twitter app for Android lets you find and follow famous people. To do this, you’ll have to explore the Twitter categories aka Lists. To log out of this app, users must navigate to the settings window.

Just like the above app, Plume can be used to manage more than 1 Twitter accounts simultaneously. Plume allows you to select a color theme, hide avatars from your timeline, customize text or image size, activate coloring system for individual tweets and hyperlinks. It supports URL shortening with Bit.ly service. You can also shorten tweets with Plume for Twitter.

This app offers better navigation than the official Twitter app. It supports swipe gestures, gif images, and infinite scrolling. To go to your timeline, swipe right and to check the live feed, swipe right.

Plume is a free Twitter and Facebook client for Android. It is monetized with advertisements. You can upgrade Plume to pro version with the in-app purchase feature.

Must Read: 10 Most stunning free Nova and Go launcher themes

This is one of the most widely used social media marking tools in the world. It supports all popular social networks that include Twitter, Foursquare, Facebook, etc. HootSuite allows you to create and schedule posts or tweets. Thus, if you’re looking for a tool that publishes an update on your social profiles automatically, HootSuite, is the perfect option for you.

This app supports text content, videos, and images. It can shorten URLs with the owl.ly service. When someone has tagged you in a post or mentioned you in a tweet, HootSuite will make you aware of it via push notification.

This app supports management of multiple Facebook pages and Twitter accounts. The free version of this Twitter app for Android supports maximum three social networks. To post updates on many social websites at a time, you should signup for the paid version of HootSuite.

The latest version of tweet caster (v9.1) has many advanced features that you’ll not find in the above apps. It features a full-screen image viewer for Android M, lollipop and Kit Kat OS running devices. Tweetcaster is now enabled with location detection feature. Activate this feature if you want to see tweets from people or news sources in your region.

Tweetcaster for Android allows you to create, copy, merge and manage lists. It has an impressive navigation bar where you’ll find utilities to compose new tweets, check updates from your favorite Twitter accounts and direct messages/replies posted by other users. Users are allowed to save search keywords.

Tweetcaster app can be configured to archive tweets automatically. It can hide or reshape profile pictures. This app pack features more than five attractive themes. It supports bookmarking of tweets, list, location, searches term, and trends.

Janetter can load 20 to 200 tweets at a time. You’ve to specify this number in the preferences interface of this app. Janneter supports customization of the name, time, and font. Other features are same as the above apps. Janetter’s UI is good, but it is not as fast as the other twitter apps covered in this article.

Conclusion: I’ve tested the above Twitter apps for Android before sharing them with you. If you think that the above list is incomplete, use our contact form to add a review of your favorite Twitter client.