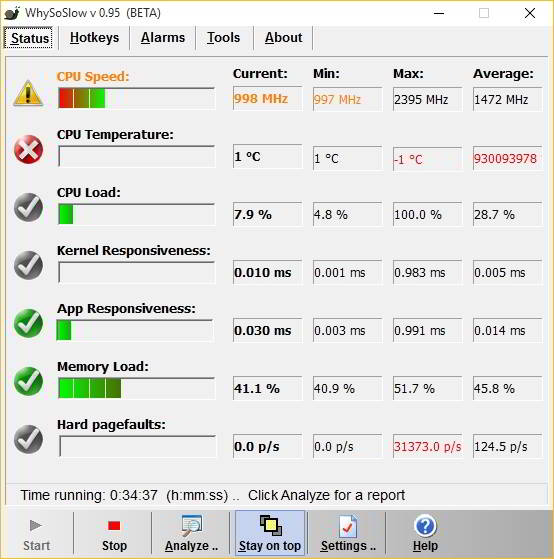 The Hardware or the software in a computer is responsible for its performance. A badly written program will crash your computer as it may overwhelm the CPU or the system memory due to which the core processes of the operating system will not able to execute their tasks. The computer will also crash if it has faulty hardware, no free disk space, etc

The Windows tune-up manager software like CCleaner, Glary Utilities, System Mechanic will identify and fix the application related problems for you. If you’re a geek who wants to find out the root cause of the problem, check out the free Windows Performance Analyzer application named WhySoSlow. WSS is a free Windows program developed by a company called Resplendence software.

The Why so slow software draws its interface on the top of other applications by default. You can disable this behavior. WSS can run in the background so that it can make you aware of the critical problems. This free software comes with the below 5 modules:

Alarm: The alarm can be configured to trigger when:

The add alarm utility has the below 5 tabs (sections):

Trigger: The user is allowed to set a threshold for triggering the alert.
Threshold: You can set a value (in seconds) after which the user will be notified of the problem.
Action: What needs to be done when an alarm has been triggered. You can select around 10 actions.
Done: Confirms that an alarm has been added.

WSS allows you to add or remove as many alarms as you want. When a problem is detected, it will display a dialog box or play a sound to alert you of the issue.

Status: This section displays will display the current, minimum, maximum and average value of the below details:

If any value reaches below its normal level, the software will warn you about it by displaying a warning, error or OK icons.

Analyze: Why so slow software has a function to analyze your computer. It will generate a report that will make users aware of the hardware’s performance. The report will display problems related to important system drivers. It will let you know about the highly fragmented files in your system. There’s no option to stop the analysis process.

Tools: This section allows users to launch useful Windows tools like power manager, disk defragmenter, program Uninstaller from its interface. Thus, you can easily optimize the system when needed.

Settings: In this section, you can change the default temperature scale, make the program start when the system boots, disable the antifreeze emergency task manager or exclude processes that you want WSS to ignore.

Hotkeys: This module allows you to configure hotkeys with which you can switch to any interface of the application by pressing a combination of keys at a time.

About: Here you will find details of the developer, copyright information, and the software version.

Conclusion: WhySoSlow is a useful software because it tracks the performance of the system’s hardware and notifies the user of important issues that are causing system slowdown. This software is still in the beta stage and it is not suitable for novice users.