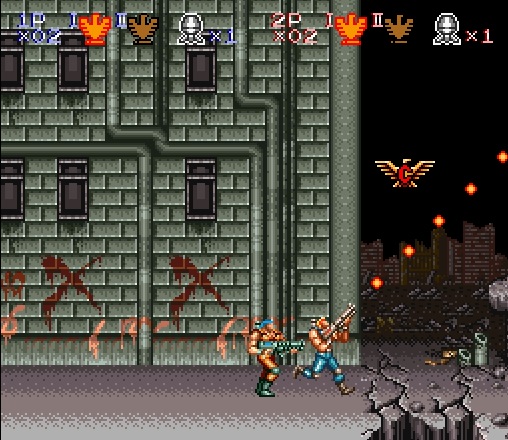 The list of Top 10 Best two player SNES and Genesis games that we’ve shared below are fun to play and very addictive. They’ll keep your eyes glued to the TV set for many hours. To play one, you’ll need to buy an 8 or 16 bits Nintendo or Sega cartridge and a video game console.

Super Mario Kart: In this edition of the most popular Nintendo game, you’ve to choose one of the eight characters who will drive a mini vehicle on the track. Like any other race, there will be a time limit, and you’ll have to outperform other drivers on the track to win the contest.

Here you’ll play the role of a soldier who is on a mission to destroy all enemy aliens that he faces. Contra III has several levels. The soldier will discover new weapons every time he destroys an object.

Goof Troop: In this two player game, you’ll have to rescue Goof’s friends that are held as prisoners in a pirate ship. To release them, you’ll have to travel (as Max or goof) across different islands and villages to gather clues. On your journey, you’ll have to deal with many pirates and monsters.

Zombies Ate my Neighbors: To begin the action, you’ll have to choose one character who’ll visit several locations (including castles, malls, pyramids, etc) to hunt down vampires, monsters and different types of creatures that have kidnapped your neighbors. The player will score 1 point for every friend he saves. There are more than 50 levels in this game.

Tetris and Dr. Mario: This is a puzzle game here you’ve to use your joystick to move, rotate and arrange falling vitamin pills in such a way that it destroys the deadly virus.

The Secret of Mana: In this game, a single player can control three different characters (sprite, hero and a girl). Each character has its weaknesses and strengths. Sprite and the girl have the ability to cast magic spells whereas hero can use his fighting skills to destroy the monsters. The user has to navigate these three characters across different regions of the map to find new clues, weapons and face various creatures.

Street Fighter 2: This is one of the best two player SNES (Super Nintendo) and Genesis fighter game ever. In street fighter two there are three rounds in which the player has to defeat its opponent two times to win the round. It has bonus stages, eight different characters and several types of fighting moves.

Super Smash TV: In this 16 bits game, the player has to smash everything that comes in its way. As you progress in the game, you’ll discover new types of weapons, and you’ve to add them to your collection.

These above games can be installed on Windows 8, 7, XP, 8.1 PC, laptops, Android phones and tablets as well.