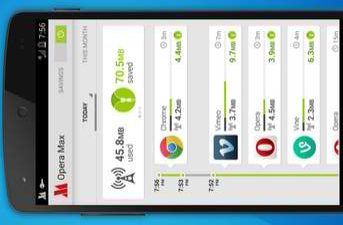 Opera, the company behind popular mobile web-browser Opera mini had launched its free internet data compression software max in 2014. This software was designed to cut down internet data transfer charges by compressing HTML and media content. Today, opera has introduced a new feature to it, the App pass.

As a part of this feature, users of the Opera Max app will be able to download some popular apps free of charge. If the downloaded app transfers data over the internet, users won’t be charged.

The App pass will also display data packs in which user will have to pay a small fee to unlock unlimited or limited internet access to his/her favorite software. This feature is very much similar to the free Internet.org app.

Opera has teamed up with the telecom operator Telenor just as Facebook partnered with Reliance Communications in India and Airtel in Africa. Internet.org is giving free access to some top websites. App pass will make users download certain software that will have limited or unlimited free internet access.

The service will be initially available to Telenor SIM card owners. Well, Telenor already has a good presence in some Asian, African and European countries (including India). If you’ll visit the official page of Opera max on Google play store, you’ll find that Max app has just 21K ratings and it has been downloaded by 1 million Android phone/tablet users.

Download count of Max app will increase once its updated version is published in the play store. The page also shows that Opera max app was last updated in January. Google, the developer of Android OS had also announced a similar project last week.

It would be interesting to see Google’s strategy of offering free access to the internet. Anyways, if you own a Telenor SIM card, try out the App pass feature on Opera max and do let us know your experiences with it.