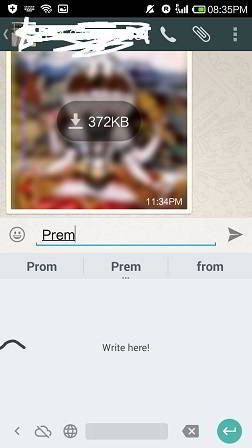 Today, Google has launched a new android handwriting input app that can recognize scribbled words and characters without connecting to the internet. The highlighting feature of this software is that it can detect words written in more than 80 languages. Widely used languages like Hindi, Marathi, Chinese, etc are supported by this Android app. GHI can recognize characters written with the stylus or scribbled with your finger. It can identify emojis drawn on the screen too. You just have to draw a smiley on the canvas displayed in GHI’s interface. Before the launch of this software, only high-end phones had the ability to identify words scribbled with the stylus. From today onwards, every Android user can make use of the cool OCR technology.

Google has claimed that this handwriting input app has been developed after several years of hard work (that involves testing, research, and development) from its engineers. This software uses some of the latest Character recognition technologies. Unlike translate and many other services from Google, handwriting i/p app works in an offline mode. All language libraries will be downloaded and saved to the storage memory of your mobile computing device.

If you find using Swiftkey or Google keyboard difficult or if you think that the virtual keyboard technology has become outdated, GHI is a perfect app for you. Voice input is a good alternative to GHI but you can’t use it when you’re in a room crowded with people (e.g court, hospital, hotel). In such cases, Android handwriting app can prove to be extremely useful.

Downloading and installing GHI is not a very complex task. Search for the app on the Google play store. Once the play store opens the official page of the app, tap on the install button. If you’re using 3G or 4G connection, this app will be installed in 3 or 4 seconds. On GPRS connection, it will take few minutes. After installation of GHI is complete, run it. This app will prompt you to accept the license agreement. Tap on the OK button. Now you’ll see the below interface.

Tap on enable Google handwriting input, download languages, select input method buttons. Now, this app has been configured and you can start using it. To test it, open any messaging or office app and scribble any text on the touchscreen using your finger. To make GHI recognize a non-English language, open it and navigate to configure languages utility. Now disable use system language option and select the language of your choice. GHI will prompt you to download the required files if they have not been installed on your mobile’s system. For example, if I want GHI to detect Hindi, I’ll have to download Hindi language files.

One interesting feature of Android Handwriting input is that you can change keyboards anytime you want. But to switch from Swiftkey or Google virtual keyboard you’ll have to open the GHI app and change its settings.

Final Thoughts:- Google handwriting input is one of the coolest Android app launched by Google. It is a lightweight software that has an incredible ability to identify all types of scribbled words and characters. Write any word on your screen, GHI will detect it.

Top 6 Best to do list apps for Android or iPhone...

My Vodafone app will not be charged for using 2G or...