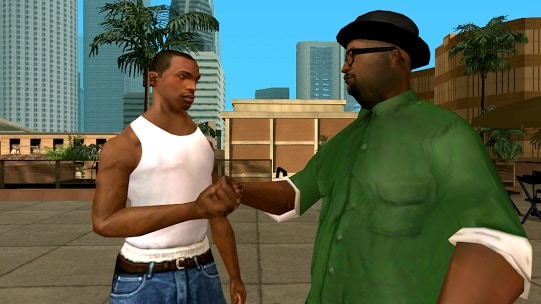 I’m sure the title of this article would have shocked you, but this is the truth. Your favorite thriller/action game GTA San Andreas is now available for the most widely used mobile OS platforms in the world – Android. The game can now be downloaded and installed on your smartphone or tablet for a price around $6.5 or $7 ( 300 to 400 Rs).

The plot of this game is same as it was for PC. Now you can enjoy GTA on your mobile phone and go through various thrills and excitements with your favorite player Carl Johnson, popularly known as CJ.

The fun part is that CJ can eat, build muscles, purchase a house, steal cars, fly airplanes, climb mountains, ride bicycles, drive a tank, swim in the sea, etc. If Carl breaks any street rules or indulges himself in any crime, he would be held by Cops. Sounds interesting, isn’t it?

Well, this game comes with amazing graphics and if your smartphone/tablet has an excellent memory and a powerful processor, then you’ll enjoy San Andreas very much. GTA requires version 3.0+ of the OS and an internal storage space of 2.4 gigabytes. Windows phone version of this software is still under development. So windows phone users have to satisfy themselves by playing this game on their PC or Laptops.

Top 6 Best to do list apps for Android or iPhone...